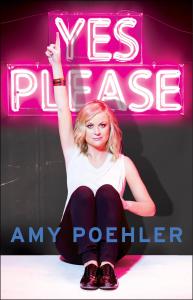 We’re provided with this voice in Poehler’s first book Yes Please, which is chock full of amusing anecdotes and realness only Amy Poehler can provide. Her personality jumps off of each page and the reader is provided with a glimpse into her life that is both entertaining and hilarious, as if anything less than this would be expected from Poehler.

Her book is divided into three parts: “Say Whatever You Want,” “Do Whatever You Like” and “Be Whoever You Are.” Each section is comprised of anecdotes and advice from Poehler in smaller, roughly three to 10 page chapters. Topics range from sex advice, to her childhood to her times at Saturday Night Live.

Needless to say, there is a little bit for everyone in Yes Please.

Each part of the book starts with the chapter “How I Fell In Love With Improv” followed by a city (Boston, Chicago and New York) in which she depicts a stage in her life where she realized she was destined to be a performer. There are different anecdotes where she is on stage that she explains what truly made her fall in love with the rush of acting.

In one of the funnier parts of the book (the majority of the book is funny, though), Poehler describes her time onstage as Dorothy in her middle school production of The Wizard of Oz. She realizes that she’s holding Toto while she is supposed to be screaming “Toto, where are you?!” during her first performance and the audience laughed at her. The next night in the show’s two show run, Poehler makes what she considers her first improvisational step and puts the dog playing Toto down.

Finally, Poehler explains, the joke lands and the dog playing Toto must have been a great improviser as he doesn’t run away, he stays still and doesn’t misbehave. It’s this poignant voice of Poehler that is captured throughout the entire book. It’s like she is sitting next to you, telling you these events of her life.

It’s not all fun and games in Yes Please, in the foreward of the book Poehler explains the tough times she has been experiencing going through her divorce with Will Arnett and how writing a book is believe it or not, hard.

At certain points, guest writers will step in and write chapters for Poehler, including her former Weekend Update companion and co-anchor, Seth Meyers. Meyers writes about how much he loves Poehler and how she is asleep next to him because writing a book has worn her out. This guest appearance, as well as others provide more of a look into Poehler’s life than she would tell us.

The book is a must for anyone who craves Poehler as a best friend and isn’t willing to pay approximately $50,000 to be her friend for a night like the people at Night of Too Many Stars. If you’re not into reading, but love Poehler, don’t worry there is an option for you. Yes Please is also an audiobook, read by the lovely Poehler with guest appearances from Meyers, her parents and others.

There’s not much wrong with Yes Please except for the fact that you’re not sitting with Poehler hearing these stories in person, but it is written so that a one-on-one conversation is maintained. Readers will lose themselves in the book, and Poehler makes sure that if that does happen, they’re truly along for the ride.

March 4, 2021 The Duquesne Duke Arts & Entertainment Comments Off on Golden Globes persists with a Zoom twist

Rio Scarcelli / staff writer 3/4/21 Though it is not the first to do so, The 78th Annual Golden Globes took to a virtual setting with a twist: co-hosting from two different locations. With Tina […]