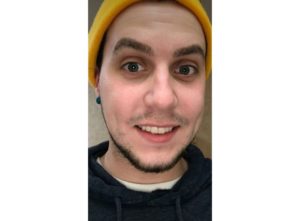 Police confirmed that a body found this morning in the Ohio River is that of missing Duquesne student Dakota James. Read more here.

Pittsburgh Police are encouraging additional witnesses to come forward with information on Duquesne student Dakota James, who has now been missing for 36 days.

In a press briefing Feb. 28, police said video shows the 23-year-old walking down Scott Place in the Cultural District Jan. 25 — the night he disappeared — at 11:49 p.m. Scott Place borders Katz Plaza, where James was seen in a surveillance image minutes earlier at 11:46 p.m. released to the public Feb. 7.

Redpath added James did not appear in any Jan. 25 surveillance footage from nearby bridges to the North Shore, where James lives. Redpath added that since James went missing there has been no activity on his bank account.

“We remain hopeful we will find him,” Lt. Victor Joseph said. “We have not given up.”

Redpath confirmed James and a female co-worker visited three bars the night he disappeared, adding the co-worker “is not suspected of any wrongdoing.”

“This is an ongoing missing persons investigation,” Schubert said. “We’re going to continue to search … We want to find Dakota for his family.”

Police said James texted his father around the time of the 11:46 p.m. video, but declined to comment on the content of the message.

All calls to James’ cellphone have gone straight to voicemail, according to police.

Police also said there is no indication of a feud between James and anybody else. Joseph added Pittsburgh Police do not have any evidence to suggest an abduction.

November 9, 2017 The Duquesne Duke Features Comments Off on A leap back in time: How life on the Bluff has changed since 1957

By Jamie Crow | Staff Writer  11/09/2017 Mid-November 1957 was a very busy time on the Bluff. Veterans Day events, Greek life rushes and Homecoming festivities filled the Thanksgiving month with an air of excitement. […]

By Samantha Zapach | Staff Writer Although the end of summer is quickly approaching, the fun activities to experience in Pittsburgh continue on. The 23rd annual Shadyside Arts Festival will take place on Saturday, Aug. 24, […]

October 14, 2021 The Duquesne Duke Features Comments Off on “Treat Yo’Self” to Pittsburgh businesses helping the community