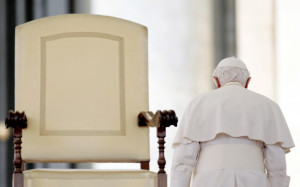 Pope Benedict XVI’s announcement on Feb. 11 that he would be leaving his place at the helm of the Catholic Church sparked worldwide speculation and left many Catholics alarmed and confused.

In the 2,000-year history of the Catholic Church, only four other popes have resigned, the last coming 598 years ago.

Who is Pope Benedict XVI?

Joseph Ratzinger, of Bavaria, Germany, became Pope Benedict XVI on April 19, 2005, following the death of Pope John Paul II. Before being named pope, Ratzinger was appointed as the head of the Congregation of the Doctrine of Faith in 1981 by his predecessor. He was promoted to the College of Cardinals in 1993 and became dean of the college in 2002.

Upon taking over as leader of the Catholic Church at the age of 78, Benedict inherited not only John Paul’s successes but his messes as well. At that time, the pope had been accused for years of covering up molestation accusations involving members of the Church.

Before being elected pope, many Catholics believed that Benedict would continue with the stringent reputation he had acquired as a member of the Congregation of the Doctrine of Faith, according to the Rev. James McCloskey.

“He was seen as a harsh interpreter of doctrine before being named pope,” McCloskey said. “What surprised most of us is that he didn’t continue that harsh demeanor. We just assumed that he would not be the sensitive pastor that it turned out he became.”

During his papacy, Benedict has revived numerous traditions, reinvigorated the relationship between religion and art, promoted the use of Latin within the Church and reiterated the importance of prayer and charitable work.  Benedict has also brought the Church up-to-date with modern technology by including offenses against children that occur via the internet into canon law and establishing a Twitter account from which the Pope himself tweets.

In addition to introducing technology into the papacy and reaffirming the Church’s core values, Benedict also devoted a great deal of time to scholarly endeavors and the unification of the Christian churches, McCloskey said.

“His scholarship is his lasting legacy. He’s written about everything under the sun,” McCloskey said. “He did not have the charisma of Pope John Paul II, but he had an authentic affection for the Church and you could tell that in his audiences.”

According to the Rev. Ron Lengwin, spokesman for the Diocese of Pittsburgh, changes a pope makes may not be as important as supporting his predecessors.

“Each person brings something to the job,” Lengwin said. “He brought to it his great intellect, he’s written encyclicals and he’s supported what other popes have said.”

His meetings and visits around the world were also particularly noteworthy as he tried to unify the Christian churches, McCloskey said.

“He made many efforts and visits to bring about the reunification of the church. He welcomed members of the Church of England who wanted to rejoin the Church,” McCloskey said. “He was not reluctant to take on controversial issues and make controversial stances. Church unity was important to him.”

When Benedict announced his decision to leave his seat as leader of the Catholic Church, theologians, scholars and Catholics around the world were stunned. Many simply didn’t know the pope was allowed to resign from the helm of the Church.

Of the five popes that have resigned, Benedict is only the second to resign amid peaceful times, following Pope Celestine V who resigned in 1294. Pope Gregory XII, the most recent to resign, stepped down to help end the Great Schism in 1415, while Benedict IX sold the papacy to his godfather in 1045 and Marcellinus abdicated in 304 due to pressure from the Roman emperor to offer sacrifices to pagan gods.

In his declaration to the College of Cardinals on Feb. 11, he announced that his resignation was the result of a great deal of prayer and conscience examination before God.

“I have come to the certainty that my strengths, due to an advanced age, are not longer suited to an adequate exercise of the Petrine ministry,” Benedict said.

At 85 years old, Benedict is the fourth oldest pope to hold the position. He has had a pacemaker since before taking on the role and has been advised to give up transoceanic flights.

If Benedict been appointed to a leadership position in any other profession, anyone would be surprised if he hadn’t retired by 85. For Pontiffs, the expectation has been that they serve until death, McCloskey said.

“We were stunned,” he said. “Canon law permits it, but many people were not aware. They just assumed the pope served until he died.”

Dean Emeritus and professor of law Nicholas Cafardi said that all of the talk is simply speculation.

“The people who are talking don’t know and the people who do know aren’t talking,” Cafardi said. “Usually the favorite comes out [of conclave] a cardinal.”

Cafardi also said that the direction the Church wishes to take will determine who will become pope.

“I think it depends on which problems in the Church they’re [the Cardinals] going to focus on,” Cafardi said. “If they want to focus on the re-evangelization of Europe, they’ll pick a European. Obviously the next pope will be spiritual and a good leader, a good figure.”

There is also speculation that a Benedict’s successor will be chosen before Easter.

To retirement and beyond

Two questions are now at the forefront of most Catholic’s minds – what do you do after being pope and what does this mean for future papacies?

Benedict will not return to being Cardinal Joseph Ratzinger of Germany once he is no longer the Vicar of Christ. He will then be Pontiff emeritus or Pope emeritus Benedict XVI. His dress will also change as he will begin to wear a simple white cassock, or robes, without his signature red shoes and elbow-length cape.

For Benedict, he will not go back to an entirely normal life. After Feb. 28, he will move to Mater Ecclesiae, a small Vatican convent where he will live with four consecrated women for the remainder of his life.

As for his influence on future popes, McCloskey believes that Benedict will continue to influence the Church from outside the seat of pope.

“I don’t know [what effect his resignation will have]. I will say that it has opened the question anew of resignation itself,” McCloskey said. “I think it’s inevitable that there will be an influence. I think it would be wise for his successor to listen.”

Though his papacy may be over, Benedict’s legacy is just beginning, McCloskey said.

“His legacy is profound and you can never measure that immediately after anyone’s tenure,” McCloskey said. “It’s only generations later when you can really test the measure of a person’s influence.”

By Carolyn Conte | The Duquesne Duke Almost 40 Duquesne students and faculty have joined the more than one million pilgrims awaiting the arrival of Pope Francis in Philadelphia for his two-day visit to Pennsylvania. […]

February 14, 2013 The Duquesne Duke News Comments Off on Pope Benedict first to resign in 600 years

By Julian Routh|Asst. News Editor The last time a pope retired was 77 years before Christopher Columbus stepped foot on the Americas. Pope Benedict XVI announced Monday that he would become the first pope in […]

February 28, 2013 The Duquesne Duke Misc. Comments Off on Times are a-changing: Issues facing the Catholic Church

By Katie Walsh | Opinions Editor Pope Benedict XVI’s successor will have a number of issues to face upon stepping into his place as the head of the Catholic Church. Topics range from defending traditional […]