Even as a graduate, former Duquesne women’s basketball guard April Robinson continues to add to her impressive collegiate résumé — with her latest accolade being named the Atlantic 10 Scholar Athlete of the Year.

The award is received by one female and one male student-athlete representing the Atlantic 10 Conference each year.

Before Robinson, the only Duquesne student-athlete given the honor was Duquesne women’s basketball great, Korie Hlede, who won the award in 1998. Upon the announcement of the award, head coach Dan Burt expressed his pride in Robinson not only for her ability on the court, but also her success in the classroom.

“April is the definition of student athlete,” Burt said. “She is one of the finest young women who have ever walked the Bluff as a student. Her work in the classroom and on the court will be a template for future gener
ations of students and student athletes. April gave her greatest effort every day and her success is the product of that work ethic.”

In her career with t 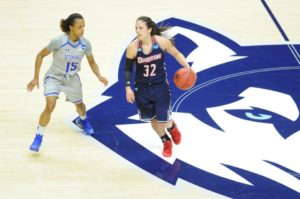 he Dukes, Robinson established herself as the program’s all-time 3-point leader, knocking down 239 in her four years. She also holds a Duquesne record for most starts at 129 total.

On top of these statistical marks, the former Duquesne guard was named A-10 Conference Co-Player of the Year, was an A-10 First-Team All-Conference selection, a Lieberman Award finalist and the Duquesne Female Student-Athlete of the Year — just to name a few.

Additionally, Robinson racked up a triple double (17 points, 10 rebounds, 11 assists) against Dayton last season, which was just the third recorded in program history.

Robinson had the ability to elevate the level of play of her teammates as well, thanks to her leadership abilities, according to sophomore guard Chassidy Omogrosso.

“She [Robinson] showed us what Duquesne basketball was all about,” Omogrosso said. “She helped me grow as a player by teaching me great leadership qualities for my next three years.”

Robinson was one of three members of the winningest class in Duquesne women’s basketball history and led the Dukes to their first-ever A-10 Tournament Championship game, NCAA Tournament and victory in the Big Dance.

“It goes to show that your performance in the classroom is also recognized aside from your performance on the hardwood,” Robinson said. “Focusing in school allowed me to learn necessary skills that enabled me to become a better athlete.”

The Duquesne graduate explained that being selected for this award was a big honor, especially with it being a conference-wide achievement.

Now Robinson is making the transition from student-athlete to a staff member for the University of Pittsburgh’s women’s basketball team, while also working to earn a graduate degree. For Robinson, coaching has always been a goal, and this position could jumpstart her career on the floor.

“This is a new chapter in my career and I am ready to broaden my knowledge of the game,” Robinson said.

November 12, 2020 The Duquesne Duke Opinions Comments Off on Kamala Harris makes history as first female Vice President of the US

11/12/2020 Alyse Kaminski | Staff Columnist When I was a kid, my parents used to tell me to not be discouraged because there weren’t as many women represented in politics or science as there were […]

February 2, 2017 The Duquesne Duke Features Comments Off on Rock that résumé: Crafting a perfect personal image

By Seth Culp-Ressler | Features Editor For most seniors in college, the spring semester of their final academic year is a daunting, stressful time. Finally, after years of having the question “What are you doing […]