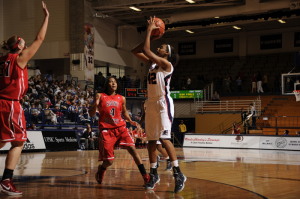 The women’s basketball team prepares to open its season Sunday against Princeton with four key seniors leading the way. Guards Belma Nurkic and Olivia Bresnahan are expected to contribute heavily on the wings alongside junior point guard April Robinson, while forwards Jose-Ann Johnson and Stasia King will assume duties in the low-post.

The team as a whole lacks experience. Even with four returning seniors, only Bresnahan has seen significant playing time, averaging 30.8 minutes per game last season. All three other upperclassmen averaged less than 20 minutes.

At the end of the 2013-2014 season, the Dukes lost Wumi Agunbiade and Orsi Szecsi. While both members of the “Wo-Show” have signed contracts and are playing in Europe, while back on the Bluff, a glaring hole in the frontcourt and starting lineup exists. Agunbiade scored the second most points in the history of the women’s program with 1,776, while Szecsi cemented her name in the 1,000-point club in her four years, with 1,148.

But the team’s mentality suggests that they aren’t worried about one or two players carrying the team. According to Bresnahan, the Dukes don’t have to depend on just two people, because everyone can score.

“A lot of people have been questioning the fact that we don’t have a go-to [player], Wumi, Orsi…the Wo-Show,” Bresnahan said. “But we’ve proven in our last scrimmage that we don’t necessarily need a go-to player because a combination of all of us came together to pull the win out.”

Nurkic thinks that once the team establishes chemistry and gets its nerves out of the way in the season’s first few games, the team will be more prepared for Atlantic 10 competition.

“We got 13 or 14 go-to players,” Nurkic said. “It makes us hard for other teams to scout. Everyone has to play us honestly because everyone can score.”

As the chemistry builds, the Dukes are keeping the ball, and themselves, moving on the court, looking to be more dynamic and get all five players on the floor involved. With no established point scorer on the roster, everyone will get a chance to contribute.

The Dukes lack experience in terms of returning players. They have another obstacle to overcome in getting the freshmen class acclimated to the team and competitive level of play that is Division I college basketball. Nurkic says the learning curve in the A-10 is steep, which is something the Dukes will prepare through the team’s non-conference schedule.

“It’s going to open a lot of eyes, especially the new kids that came in. They’ll get experience with Division I basketball and how everything is,” Nurkic said. “High school, [junior college], anything else they played beforehand is a lot different than how it is here. Even with the scrimmages we had they didn’t get the actual atmosphere.”

The team will gain valuable experience right away when they play Princeton on Sunday and No. 25 Syracuse on Wednesday at the Palumbo Center. It might be more of a reality check for the Dukes, as both Princeton and Syracuse make regular appearances in the NCAA tournament. But the building anticipation surrounding the season will be behind them, and by next week, the team will have 80 minutes of live action against nationally renowned opponents.

King sees the first two games as a way to prepare for the rest of the season.

“I think people are looking at it like Princeton, Syracuse against our young team, but I think we kind of need that so we know what to expect and it’s better to get that at the beginning than at the end and we need to step it up,” King said. “That’s just going to make us take a bigger leap, in terms of experience.”

David Borne | Sports Editor Nov. 14, 2019 Basketball has taken Wumi Agunbiade all over the world.  Between multiple stops in Pittsburgh and playing professionally in Germany, Italy and Romania, the Pickering, Ontario native has […]

Duquesne WBB team set to face UMass in A-10 battle

February 7, 2019 The Duquesne Duke Sports, Women's Basketball Comments Off on Duquesne WBB team set to face UMass in A-10 battle

David Borne | Staff Writer Feb. 7, 2019 It’s been a year full of ups and downs for the Duquesne women’s basketball team. After surviving what was a loaded non-conference schedule, Duquesne seemingly found its […]