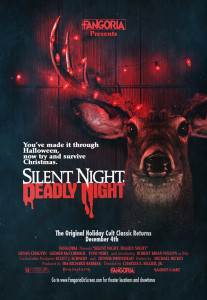 Outside of Halloween, Christmas is the only American holiday that has a massive film canon built around the setting. This canon is spread over several decades and genres including crime (Die Hard), home invasion (Home Alone), superhero (Batman Returns) and comedy (Jingle All The Way). This week, I had the wonderful opportunity to interview three key members of the 1984 Christmas slasher film Silent Night, Deadly Night’s film’s production team: writer Michael Hickey, editor/second unit director Michael Spence and producer Scott Schneid.

JF: What inspired the story of the film?

SS: I received a screenplay from a former student from a college screenwriting course I taught. It was called “He Sees You When You’re Sleeping. It was very amateur: a slasher movie with a Santa Claus character in it. Even though the screenplay was unprofessional, there was an idea embedded in it-a psycho dressed in a Santa Claus suit-I felt was fantastic. This was the time of the first Friday the 13th and Halloween, and I said, “Wow. No one’s done anything like this for a teen audience: what about a killer Santa?” We threw the script out basically and developed a whole new project. That’s when Michael [Hickey] came in and did all of this great work.

MS: Well, the company had been in Utah for a long time. We had started there with the Grizzly Adam series, and did a lot of movies of the week and theatrical movies out of Utah. We had been headquartered in Midway, where most of the movie was shot. It was a natural location and turned out to be perfect for the movie, because of the snow and all of that. There was one scene we shot in front a toy store, where a couple of people were murdered, and I was second unit directing, and wanted snow to be falling in the front of store. We didn’t have it, as there was snow falling, so we had to use plastic snow, in that case. That was probably the only time we had to worry about it, as we were fighting the snow for the rest of the time.

JF: Were there any difficulties?

MS: The biggest issue with shooting it was that it was in the snow, and it was cold. For me, Second Unit shooting involved a lot of night stuff: I remember shooting the scene when the girl lands on the antlers and flies through the window. I had to do some stuff outside, and it was at three or four o’clock in the morning, trying to get it done before the sun came up. A lot of the time, it was drinking a lot of coffee and stamping your feet a lot.

JF: Comparing the final screenplay to the film, were there many changes?

MH: I never saw the earlier script; no one ever told me about it. The script that was developed was a whole   new story, with nothing carried over from the script that Scott saw. The only thing we took over from that script was the very general concept of a slasher movie about Santa Claus. As for changes going into production, the movie as it stands, is at least 99% faithful to the script that was turned in. The dialogue is all verbatim, except for that of one actor – the actor who played Andy, Billy’s boss in the stock room of the toy store-ad libbed a couple of lines of dialogue. Naturally, they drive me completely crazy every time I hear them.

JF: The film created controversy due to its setting and the villain being adorned in a Santa Claus outfit. How did you learn of the controversy?

MH: It all happened at once, on the day that it opened, I guess. I read about it the newspaper, and we started calling each other to talk about it. We started to notice that it was getting a level of coverage that was completely out of proportion. Dan Rather did a story about it on the CBS Evening News, People Magazine did a story on it…Entertainment tonight interviewed me onscreen, and we all did radio interviews. It snowballed: it became a thing of the moment; there must have been nothing happening with the news. It took over to a degree that I find astonishing and hilarious.

JF: What is appealing about the film is that it questions the god-like power Santa has: namely, weighing whether children are saints or sinners.

MH: That’s why the concept is so workable: and why people get it immediately. They’re being threatened with the Santa Claus myth: he knows if you have been bad or good, so be good for goodness’ sake. It sort of begs the question of, “for what?” Our movie set out to answer that question.

JF: When did you notice the film had acquired the status of a cult film?

MH: To me, that’s a relatively recent occurrence. I think it has to do partly with the big leap in video and the internet:, which has allowed Silent Night, Deadly Night fans to come out of the closet, after seeing other people’ comments on YouTube, where somebody wrote on some of the clips as, “This is the greatest Christmas movie ever made!”

SS: When there is a repression of something – and if that something is intended for a rebellious teenage audience, that increases its cult factor. If it is being repressed, people want to see it much more. It was banned in the UK until 2009. It was on video in the United States for a while, but then some of the video companies went out of business, and for a while, the only copy available was a big box VHS, which was selling on Amazon for $125. All of these amplified the cult significance of the film.

–This interview has been condensed and edited.