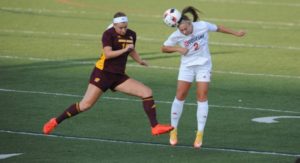 Every minute on the field, even in 90-degree heat, is another opportunity to improve, at least in the mind of Casey Aunkst of the Duquesne women’s soccer team.

The sophomore center back played through all 110 sweltering minutes in Duquesne’s double overtime 1-1 draw against Youngstown State Sunday afternoon, tallying the lone goal for her team.

“She is a warrior,” Alvine said. “She really has the ability to push the boundaries of herself physically and mentally.  It’s really tough to play 110 minutes in that heat, but to be able to stay focused and to play on the level she’s playing at, that’s really special.”

Aunkst has played each game in its entirety for the Dukes so far this season, accounting for 290 minutes total.

Leading the Red & Blue early on this season with one goal and one assist, Aunkst looks to continue to improve her game.

“Although playing large amounts of minutes can take a toll on my body, it also helps in the experience department,” Aunkst said. “Each rep or kick is another chance to perfect it and become more and more consistent, so every minute I’m out there playing is another chance to get better.”

Even as a freshman, the defender started and played in 22 of the 23 games last year. Already surpassing her point total of 2015, Aunkst has shown continued growth in the beginning of her sophomore campaign.

Despite her role as a central defender, Aunkst hopes to continue lighting up the board for the Dukes this year.

“I do the best I can to keep the other team off the scoreboard as a defender,” Aunkst said. “When I get my chance to contribute offensively, whether it be a free kick, corner kick or my coach trusting me to take a penalty shot, I try to take advantage of it to my full ability.”

On a team with 15 juniors and seniors, Aunkst finds herself to be a young leader in the group, but nonetheless is in a position that requires play-making.

Having a defender like Aunkst who is able to support the team both offensively and defensively is a vital asset, according to sophomore goalkeeper Kyra Murphy. The two have been teammates since their sophomore year of high school where they competed for the Beadling Soccer Club in Pittsburgh.

Murphy explained that she can always count on Aunkst to back her up in goal.

“Having Casey back there with me is great,” Murphy said. “She works hard until the final whistle blows. She’s a great defender, but with one ball can give us the offensive boost that we need.”

The Dukes, who graduated six seniors last season and will graduate nine more at the end of 2016, will need student-athletes like Aunkst to step up this year as the team looks to defend its title as Atlantic 10 Conference Champion.

For Alvine, having a defender with the ability to score like Aunkst is just a bonus when you look at her leadership qualities on the field.

Women’s Soccer falls in opener vs. Pitt in 2OT

August 24, 2017 The Duquesne Duke M/W Soccer, Sports Comments Off on Women’s Soccer falls in opener vs. Pitt in 2OT

Marie Jubert | The Duquesne Duke The athletic department at Duquesne has been promoting the basketball program throughout the academic year in hopes of rallying together school spirit. The preparations for this initiative began over […]

Andrew White | Staff Writer 08/30/2018 After starting its season off with consecutive tough losses to Arkansas and No. 4 Penn State, the Duquesne women’s soccer team was happy to be home on Friday, Aug. […]