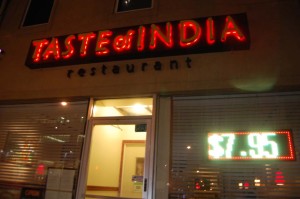 It’s a classic case of looks can be deceiving; the things you find in places you least expect it. An Indian restaurant in Bloomfield is an unexpected find.

Okay, maybe it’s not that unexpected. I got into Taste of India, located at 4320 Penn Ave. right across from Chidren’s Hospital, around 5:20 p.m. and I was the only one there. Kind of weird, but I was all right with it.

I’ll be honest: I’d never been to an Indian restaurant before. But Taste of India came with a recommendation from one of my best friends. So, I decided to hang loose and try it.

The process of ordering wasn’t overwhelming, but there was some struggle. The menu looked to have all that an Indian restaurant should have: appetizers, soups, dishes with paneer (smoked cheese), chicken, lamb, beef, seafood and vegetarian dishes. Oh, the choices.

I ordered the coconut soup (coconut milk with almonds, raisins and pistachios) to start, feeling cold and dreary from the gorgeous Tuesday borderline freezing rain storm.

While I was waiting for the soup, the server brought thin crisped Indian bread, which escapes me at the moment, that somehow reminded me of bacon. I know this is probably the furthest thing from what it tasted like, but that’s what it seemed to me. But I’ve been out of the bacon game for four years. Anyways, the poplar was good and came with two unidentifiable relish like toppings, one green one orange, which were both tasty.

The soup was good when it arrived a little later. My server had advertised it was a sweet soup and it was just that. The nuts and raisins were a solid addition to the soup, but seemed to disappear after three or four spoonfuls. Either I’m good at gathering soup treasures or there weren’t that many of them, but I don’t know.

I ordered Navrattan Korma as my entrée, with an order of paneer stuffed nan as well. I had paneer before and it was great and I knew I had to try nan. The Navrattan Korma came recommended by my server from the vegetarian menu chunk. She asked how spicy I wanted the dish, on the one-to-10 scale. I went with six. But I feel like that’s a setup everytime. Like they want you to go higher so you don’t feel inadequate, when it comes to spice.

Taste of India was peaceful, given the low decibel Indian music playing throughout the 40 to 50 capacity dining room and the scarce amount of customers, under 5 eating in by the time I left. Taste is open until 2:30 for lunch, where they have a $7.99 lunch buffet, which I was bummed that I missed, then opens again at 5 p.m. for dinner, so maybe their “dinner rush” comes a bit later? Perhaps.

It took about 20 minutes after I ordered my main dishes (Navrattan Korma and nan) for them to arrive. I was curious about the wait, as I was nearly the only one in the restaurant during my dining time. But alas, I waited and checked Instagram and did whatever else kids do these days to pass time.

When the food did arrive, oh my, oh my, was it good times. I tore into the paneer nan first. The nan tasted like a cheeseless pizza and I mean that in the best way possible. If that was uncultured or politically incorrect, let me take this time to issue my apology: it was delicious, I’m sorry.

After trying the nan, I went into the Navrattan Korma, which was described by the menu as “nine vegetables, various spices, nuts and cream.” This was broad but I went with it anyway, my server thought it was a good choice anyhow. And she works there! Truth be told, it was a good choice: it was excellent. The sauce was creamy, the vegetables were great. The ones I could identify were green beans, peas and almonds (which clearly aren’t vegetables). The Navrattan came with rice and the two paired together made for a great combination.

I ate half of both the paneer stuffed nan and Navrattan Korma. The portions were well-sized and I was stoked for leftovers. Who isn’t, you know?

My bill ended up at $17.12, $3 for soup, $4 for paneer nan and $9 for Navrattan Korma plus tax. I don’t regret spending any of that. It was a good choice all around. The only real setback for Taste of India is the prep time on food, But other than that, I would recommend it highly, even with the somewhat great distance from campus (because riding a bus is so taxing, ugh). Grab some friends and a car. Or take the bus. I swear it’s really not that bad (the bus). Most of the time. Taste of India, go. It’s good times.