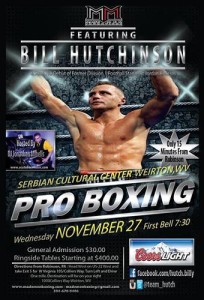 The ballroom with flashing lights in every color was shaking because every person in attendance was on their feet screaming. That was the scene when the ring announcer said three words Bill “Hutch” Hutchinson.

Hutchinson (8-1-2, 4 KOs), a Pittsburgh, Pa. native who attended Montour High School, was in against Gabriel Morris (4-23-2, 0 KOs), of Toledo, Oh., in a light welterweight bout at the Serbian American Cultural Center in Weirton, W.Va. on Wednesday, Nov. 27. Hutchinson was the aggressor for all six rounds and kept the tempo at a good pace. Hutchinson took a couple of shots because he was coming forward. He never seemed to be in serious danger, though and he always was able to land the higher quality punches. Morris, the much bigger man both in weight and length, seemed content to stay in his defense and never risk taking a punch to win even a single point on the scorecards. The fight went to the scorecards where the judges scored the bout 60-54, 60-54 and 60-54 giving Hutchinson a unanimous decision victory.

Hutchinson was disappointed after the fight, but he knew the win was worth it.

“Don’t get me wrong I had a good performance tonight. I’m just disappointed because I know what I’m capable of,” Hutchinson said. “No one puts more pressure on themselves than me.”

Hutchinson wishes he had been able to land his best punch and end the night.

“I didn’t get it off. I was trying to set him up with a couple of different things, but he is just so defensive,” he said. “I was hurting him even when he was blocking them. I stumbled him with my jab a couple times.”

Hutchinson was pleased with the crowd and the atmosphere in the building.

“I love it man. It means so much to me. The support is amazing,” he said.

Hutchinson looks to be very busy in 2014.

“Absolutely before march [I want to be back in the ring],” he said. “I want to get busy. I want to fight at least six times next year.”

“[That is because of] instances like tonight. I need to learn and I need to get that ring time. I only had nine amateur fights and I am learning on the fly.”

The co-main event was a 4 round heavyweight bout. Angelo Magnone (3-0, 2 KOs), of Weirton, W.Va., faced Michael Davis (0-1), of Cincinnati, Oh. Davis was making his pro-debut and proved to be a tough test for Magnone. Magnone is built like a linebacker, which can be more of a hindrance than an advantage in the sweet science. Magnone struggled when the knockout did not come right away. He was able to land hard punches, but he also took some damage. He is still learning, but he needs some refining on his technique.

The next fight was a junior middleweight bout set for six rounds. Jovan Francois (5-30-2, 5 KOs), of Brooklyn N.Y., fought Shane Gierke (7-0, 7 KOs), of Youngstown, Oh. Gierke was a tough test as he is a fighter with power, evidenced by his knockout percentage. He wobbled the young Francois early, but Francois rose to the occasion and scored a thunderous knockout at the end of the first round.

The next fight was a light heavyweight matchup scheduled for four rounds. Aaron Quattrocchi (2-0, 1 KO), of Follanshee, W.Va., faced J.R. Hines (0-1), of Lexington Ky. Quattrocchi threw hard punches and showed the ability to navigate a rangy opponent. Hines several time threw punches with his eyes closed, fitting because at 2:46 of the first round the fight ended with Hines’ eyes closed while he lay flat on his back.

In a four round junior middleweight bout Courtney Pennington (7-0, 4 KOs), of Brooklyn, N.Y., faced Anthony Walls (0-7), of Akron, Oh. Walls was quick and was able to circle away from Pennington early in the fight. Pennington adjusted well and was able to cutoff the ring and connect with his powerful punches. Pennington quickly regained command of the fight, scored a pair of knockdowns and ultimately settled for the unanimous decision victory: 40-34, 40-34 and 40-34.

The first pro bout was cruiserweight fight set for four rounds. Samuel Suska (1-2, 0 KOs), of Pittsburgh, Pa., faced Zach Swallen (0-6), of Cincinnati, Oh. Suska came to the ring focused and took a long look at Swallen’s soul when he got introduced. Swallen didn’t like the show from Suska and responded with dirty tactics. Before either fighter had landed a punch Swallen had already recorded two takedowns, unfortunately in boxing the cost you points. After the third or fourth time it was clear Swallen wanted the disqualification, which he got. After the fight was stopped a scuffle in the ring almost led to a trainer fighting Swallen. Luckily cooler heads prevailed and the ring was cleared without a punch being thrown.

Hutchinson has a bright future and he is aware of the potential he possesses.

“I expect myself to be great.”