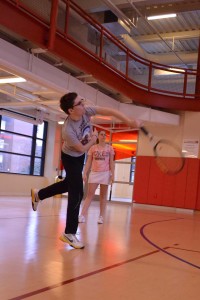 Tennis, the famous sport with roots in Birmingham, England in the 19th century, is loved by many, including myself. My love of the game urged me to team up Megan O’Sullivan, an England-native and senior Duquesne tennis player to teach me how to give a proper serve.

We planned to practice on the roller hockey rink outside of Towers but as the skies darkened in true British fashion, we came to the realization that learning to serve in the rain was not going to be an option. Instead Megan and I moved indoors to practice, in hopes that I will be able to ace my opponents come summer time.

I played tennis in high school and on Duquesne’s club team, but my serve is the weakest part of my game and I desperately wanted to improve it. I felt strange walking onto a basketball court in the Power Center with my racquet in hand, but I wasn’t going to let a basketball court diminish my lesson with a professional.

“The serve is probably the most important shot in the game,” Megan said as we began.
The serve sets the pace for the rest of the game and each player’s is unique to him or her, almost like a signature. Broken down to its simplest form, a flat and powerful serve can be divided into three basic elements.

Tossing the ball up into the air is the first step to a great serve. That might seem obvious. The key to this is placement. Too far in front of you and you will find yourself reaching, too far behind you and you will lose you balance and forward momentum. A good standard to have is to throw the ball up high and slightly in front of your body with your arm fully extended.
As the ball is leaving your hand, it’s time for the second element of the perfect serve – the swing-through. Your racquet hand, mine being lefty, should come backward as your other straightens out to the sky, or in this case, ceiling. Megan says to think of your two arms like the Nike tick. Remember, back hand bent, almost to a 90 degree angle, forward hand extended.

The final and most fulfilling part of the serve is making contact with the ball. For a flat serve with power, you should be hitting the ball in front of you with your racquet arm now fully extended and your body moving forward. For a serve with more top spin and bounce, you should focus more on brushing against the ball then hitting it dead on. In either case, it’s important to remember to finish through the serve by bringing your racquet hand across your body and stepping through.

Keeping these three basic steps in mind, I lined up at half court to practice a couple myself. I found that although I would always make contact with the ball, my serves weren’t nearly as powerful and well placed as Megan’s.

“It all comes from the legs,” Megan said when I inquired where she gets her strength. “Watch.”
I watched as the ball left her hand. Her legs were bent and by the time she made contact they were straight again as she moved forward. Turning her body into a spring, she was able to transfer the power from her lower half into her swing.

I reviewed the process in my head a few more times then set up for the serve. I tried it out and framed it the first time. One of my biggest problems when it comes to tennis is thinking too much about the next step.

“It’s fine, don’t complicate it,” she said in reassurance.

I set up again to swing, this time making contact in the center of my racquet sending the green fuzz flying across the court and generating that crisp pop that comes with a solid serve. Aced it.

Tennis is a mind game plain and simple. It’s easy to get caught up in strategy, or think too much about technique but if I learned anything from my practice with Megan it’s to keep an clear mind and just play.

While you or I may not be on the way to the next US Open or Wimbledon, practicing these simple strokes and keeping in mind the principles Megan talked about anyone can develop a serve. So the next time you’re on the court in fear of double faulting, just remember – use your legs, keep it simple and maybe one day you’ll land a babe like Maria Sharapova. Or you’ll have a serve to be proud of.

By Bryanna McDermott | The Duquesne Duke At four years old, Julianne Herman watched her older brother play tennis in their hometown of Philadelphia, dreaming of beating him one day. Now, as a four-time Atlantic […]

More than love on the court: women go for gold

April 10, 2013 The Duquesne Duke Sports Comments Off on More than love on the court: women go for gold

Rich Donahue | The Duquesne Duke The Duquesne women’s tennis team is getting ready to end its season on a strong note as the Atlantic-10 Championship approaches. The Dukes are currently 7-9 on the season […]

Acing it: men’s tennis looking for A-10 crown

April 3, 2013 The Duquesne Duke Sports Comments Off on Acing it: men’s tennis looking for A-10 crown

All photos used for tennis cards are from the athletic department Joey Sykes | The Duquesne Duke With only two meets left, the Duquesne men’s tennis team looks to end its impressive 2012-2013 season in […]