Run Forever, a Pittsburgh-based indie/punk band, is currently on a seven-stop tour with the N.J.-based two-piece emo band Dads. Their final stop is Stay Sweet Fest on April 14 in Richmond, Va.

Formed in late 2008 when Heubel and Staub moved to Pittsburgh from Erie, Run Forever has been influenced by friends’ bands like Adventures, Code Orange Kids and Heartless.

In this issue, Anthony sits down with The Duke’s Zach Brendza and dishes on the behind-the-scenes details of what Run Forever has in the works.

ZB: Where’s the name from? 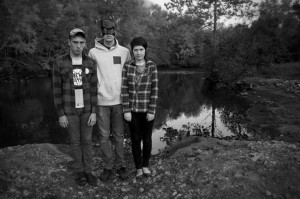 AH: I feel like every band tries to think really hard, about a cool band name or you want a band name that’s memorable. We thought about it for a really long time. Kind of simple and what we wanted to do…To us it’s about traveling and hanging out with your friends all across the country. Touring. Living in a way that, to a lot of people, is strange. We sleep in our school bus with bunk beds in it. To us that’s cool. There’s nothing else we’d rather be doing.

ZB: What’s up with the bus?

AH: The bus is pretty crazy. Radiator just broke. We thought it was gonna be the end of it. We got it fixed. Had it for 4 years. We bought it for $2500 in Coal Center, Pa…It’s a 1990 GMC Vandura, essentially a bus with a van body. It’s cool. We’re super spoiled….It’s awesome. It makes touring so comfortable. It’s really great in fall or early summer. Still not too hot. Super comfortable…..I hope that people don’t get offended when they ask “you wanna stay with us?” [and we say we’re going to say in the bus]. We really like staying in the bus, camping, snacking out. It’s a little party for us.

ZB: Balance of band and work?

AH: We have really supportive jobs that are really, really cool with letting us tour. Cassie works at a coffee shop and she’s a really hard worker, picks up shifts. Her boss is really cool with the fact the she’s touring. She recently took off a month and half. I work at a bakery [and they are] really into it. Owner is older guy and he is really into it …. Tom works at a bike shop and started when it was a small business. Tom’s just a hard worker and been there for so long, works 10 hour days. [His boss is] Cool with him taking off…. Living expenses are pretty low….works out enough to have money saved and to go on tour. [We have] Pets too. Our friends come over and hang out with them [when we’re on tour].

ZB: How is living in Braddock?

AH: Living in a house together in Braddock, Tom recently moved out but right down the road. Really really close to each other…. Braddock is just like really awesome. I’ve lived all over Pittsburgh – Friendship, Mt. Oliver, Beltzhoover, Penn Hills. All those places are cool, but Braddock is the first place I’ve ever lived where I feel a part of the community … there were 20,000 people in Braddock, now there’s 2,000. On paper that’s not a lot. Living in the town there’s still a lot of people … it seems like everyone knows each other. When you’re in one of the few businesses, everyone says hi … it’s just a really great place. I love it because its so close to the city and there’s a small town vibe. Corner stores… .its my favorite place I’ve ever lived.

ZB: What do you think of Pittsburgh’s boom of bands? Who are some of your favorites now?

AH: I’m like seriously so proud of Pittsburgh right now. So many good bands. The music scene is awesome. Pennsylvania in general is killing it right now…..[my] favorite bands right now are Heartless, Code Orange Kids, Adventures and all the other bands they’re involved with, Blood Red, Hounds of Hate, Pray For Teeth and Old Accusers. There’s so many good bands right now. I probably left some out. Adam Thomas has been booking shows forever. Tanner Douglas has been taking a ton of photos, Brett Shumaker been booking a ton of shows … all these great venues and the music scene is super awesome right now

AH: Doing a tour with Pity Sex. Super exited about that. We just recorded two new songs for a release that hasn’t been released, but we have plans to release some new music …. Very kind of slowly write for another full length in the future. No plan right now. Just kind of writing songs. Not writing for anything. Just writing songs to keep busy…. We’d love to go to Europe some time. Plans tour through Spring and Summer and Fall. Nothings been announced yet. But [there’s] a bunch of cool stuff that I’m super stoked on.