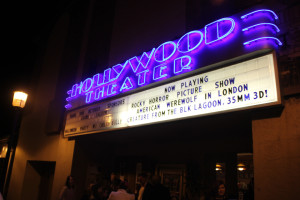 By: Joey Sykes | The Duquesne Duke

On quiet Potomac Avenue in Dormont sits The Hollywood Theater, a theater with a history just as unique as the movies it shows.

The theater, opened in 1924, has been run continuously until 1998 when it was shut down due to signs of aging and the rapid increase of new technology such as VCRs and DVDs, according to Margaret Jackson, a member of the Friends of the Hollywood Theater, the group who helped reopen the space. Another problem that not only the Hollywood, but also other independent theaters had to deal with was the increase of large multi screen theaters in the Pittsburgh area. Jackson believes this was another deciding factor in the downfall of the Hollywood.

Jackson said people just didn’t want to go to an old theater anymore when you can just get them on demand.

“In the 1980s, VHS had come into being and the movies were everywhere,” Jackson said. “It sat empty for a long time due to this and people really didn’t want to come sit in an old, run down theater when they could just go to the new multiplex to see all the new movies.”

The theater, which at one point held 650 people, remained empty until 2006 when the Bradley Center, an organization that provides work to mentally and physically challenged youth, helped reopen the theater with a new look. The seating at the Hollywood was decreased to 300, which offered viewers a more spacious viewing experience. When it reopened for the first time, the young teens from the Bradley Center helped keep it running by offering their services as ticket takers, ushers, and concession stand workers.

Unfortunately, the theater closed its doors again in 2008. Chad Hunter, the theater’s executive director, believes it was due to the kids being too young to work at a place that shows films meant for an older audience.

“I think it really hurt them because these kids were too young to see R-rated movies,” Hunter said. “I mean, how many people are going to come out and see Disney movies at a theater like this?”

In 2009, another group of investors, the Motion Picture Heritage Corp., tried to revive The Hollywood. They were unable to keep it going and that eventually failed too.

Hope was still alive though.

In November 2010, a group of movie aficionados and Dormont residents gathered to reopen the theater and establish it as a place to have a unique movie watching experience. The result was “The Friends of the Hollywood Theater.”

Fundraising efforts were primarily put towards new equipment due to the Bradley Center putting in so much money in renovations.

“They did a great job updating the theater,” Jackson said. “I think they put in around $300,000 into it. That made things so much easier for us to finally open. We were very lucky.”

Modern technology was going to have to be introduced to the theater sooner or later.

“A single screen theater is almost impossible to run without newer technology such as projectors and blue ray players,” Hunter said. “We were showing a brand new movie in the old theater on some of our old equipment and it was just not a good experience.”

The board is now trying to raise money for a new digital projector, which is expected to cost around $75,000. If the Hollywood doesn’t come up with the money in time, they will be forced to “go dark”. “Going dark” means that the theater will have to shut down due to the fact that independent theaters will not have the rights to show new movies anymore if they don’t switch from using printed film, to using digital film. Hunter knows that getting the projector is either life or death now, but is optimistic for the theater’s future.

“It’s hard to come up with that type of money when you run a non profit business,” said Hunter. “This is a tough situation to get through, but I know all of us here at the theater have hope that we can finally make the switch to digital and keep this place alive.”

Muriel Moreland, a member of the Dormont Historical Society, was happy for the reopening of the theater.

“I used to go there all the time with my friends when we were younger,” said Moreland. “There was always a great atmosphere. It is nice to see what 11 people [FOHT] with a common goal can achieve.”

Jackson also has some special memories of the theatre.

“My favorite moment was when we showed The Princess Bride, said Jackson.” When the movie ended, the entire theater erupted. It was that feeling of community, that shared joy in a beloved movie that you just don’t get anymore.”

The Hollywood shows a movie almost every night of the month so there is always something to see. Films range from cult classics to modern Indies.

If interested, you can make a donation at the Hollywood’s website, www.thehollywooddormont.com. The theater needs whatever help it can get and donations are appreciated.

The Hot Four: Where to find fun in Pittsburgh

August 19, 2015 The Duquesne Duke Arts & Entertainment Comments Off on The Hot Four: Where to find fun in Pittsburgh

By Loren Smith | Staff Writer Found in the Pittsburgh suburb of Dormont, The Hollywood Theater is a little-known 1920s movie theater that specializes in different varieties of film. This quaint little theater has been […]

By: Marlee Ebbert | The Duquesne Duke “We say JC. You say CP. Ready? JC,” shouts cast member, Lindsay Kozlowski. “CP!” the audience yells. This is the standard beginning to The Junior Chamber of Commerce […]