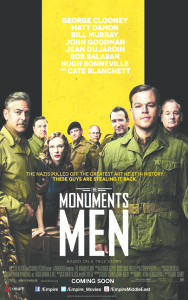 In terms of film, 2014 has been off to an uninspiring start.

It began with the half-cooked Jack Ryan reboot, and has supplied another disappointing dish, The Monuments Men, released Friday.

While watching the film, one question emerges: how could it have been such a disappointment? It had a cast consisting of Academy Award winners (Clooney, Blanchett,) and nominees (Damon, Murray) ; a director (George Clooney) whose career is marked with Best Picture nomination and no excessive violence or horrible computer generated imagery.

The answer to this question lies with the screenplay.

The Monuments Men is about a group of art scholars, who in World War II launched a campaign to reclaim art of historical and cultural significance from the Nazi’s, as well as to protect monuments from bombing. From this summary alone, the film screams Best Picture material; it chronicles a little-known historic event (like Argo,) and is of human interest. But, the translation of the story to film results in the concept losing some of its viability.

Worse, the audience only gets to know them in a war-time setting. The limited coverage proves problematic later in the film when there are two dramatic twists that are supposed to tug on the audience’s heartstrings. But audiences could not respond as hoped, since the characters were sketches, in terms of their development, and not fully fleshed out.

From the not-fully established characters, there lies another problem: focus. Quite simply, the film has too many eggs in the basket, in terms of plotlines. There are two ways this problem could have been easily resolved: adding to the film’s runtime, which was shy of two hours, or removing some of them. While I recognize the first option is not economically viable – 2.5 hour run times seem to be exclusive to summer blockbusters or superhero films – still, it would have allowed the film to successfully harvest the crop from its narrative seeding. Or, the other option would have resulted in a tighter focus.

Having acknowledged the problems of the film, I acknowledge the aspects of the film that worked. The cast in the film is perfect; each member worked well with the limited material they were given. Seeing Bill Murray in a film with Clooney, Damon, Blanchett and John Goodman is worth the price of admission alone. Secondly, the level of attention paid to the sets and locations results in superbly composed shots, but also reinforces the stakes: namely, why it is important to preserve marvels of architecture, such as cathedrals, from the devastation brought by bombs.

At last, but not least, the film’s historic premise supplies some terrific visuals. It was a treat seeing the Western Art canon assembled on the screen.

The Monuments Men is not a bad film, by any means. The acting is top notch and the sets and locations are gorgeous. Buried beneath the mistakes is a terrific film. What is frustrating is when a terrific film reveals itself, in random moments in the film. If the mistakes had been caught in the pre-production stage, The Monuments Men could have easily been the best film of this year.

As is, the film is a fun one to spend an afternoon watching.