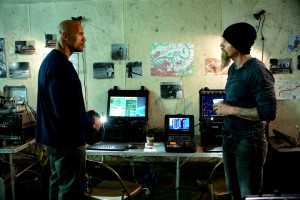 If you’re torn about what film to catch before Jack the Giant Slayer is released, this is what I would suggest. It is one of the few films that appeals to the three brands of audience. For long term fans, in this case, fans of Dwayne “The Rock” Johnson, it is another good contribution. For fans of the action and/or thriller genres, the film delivers the suspense and adrenaline rush they seek and for casual viewers, it provides a simple story with well-written characters, and a nice layering of action, suspense and drama.

Snitch, released Friday, chronicles John Matthews’ (Dwayne Johnson) efforts to reduce his son’s prison sentence for a set-up drug possession, by going undercover to expose and aid in the destruction of a drug cartel. That is all I will say about the story, as it is simple and I do not want to spoil the few surprises in it.

Excluding a few imperfections, Snitch is a good film. The first aspect that works well is the casting. The three main players – Dwayne Johnson, Susan Sarandon (as a Federal Judge) and Barry Pepper (as a DEA Agent) – excel, particularly in the scenes they share together, as they embody three different positions on how to proceed in dismantling a drug cartel. In addition, Jon Bernthal (Shane from The Walking Dead) refuses to be outshone by the trio in his portrait of an ex-con trying to rebuild his life, after serving time, only to be forced back into the lifestyle that nearly destroyed him.

My chief complaint with the film is the same I had for A Good Day to Die Hard: shaking camera movement. While the incidents do not overrun the film as they did in the latest Die Hard, the few times they occur, they are as visually displeasing. However, on the whole, the handheld camerawork – which creates this problem – is for the most part, stable.

Another problem I have with the film is the confusing message on the punishments dispensed for drug possession. This confusion extends to one of the main branches of the narrative, thus making analysis of the message, and the film as a political unit, difficult. With those small defects noted, the story of the film is simple, but engrossing. Some criticism has been leveled towards the simplicity, but, I will refer once again to the most recent Die Hard. After having that loathsome viewing experience, I welcomed a simple film that had honest intentions. And viewers will discover it is one of the decently made thrillers that pulls the audience into the chaos, and does not release them, until the end.

To reiterate, Snitch is worth seeing. Johnson, Pepper and Sarandon render their characters well, which reinforces the stakes of the film. For fans of Johnson, such as myself, the film does meet the minimum requirement to meet the standard set by Walking Tall. But, the car chases and gun battles do not dominate the film. They are used with discipline, which is refreshing. As I said, the best way to view the film is by not untangling its politics, as it is a frustrating decision.

Personally, part of me wishes they had taken a firm stance on the policy and crafted the film to make it an unrelenting, A-list drama that makes audiences question the decisions made in the ongoing war against drugs. But, the film works well on its own, as an action-thriller. The intellectual richness in the film is not in its politics, but its well-painted depiction of a man descending to the worst pockets of the underworld to save his son.

That, for me, was worth the price of admission alone.