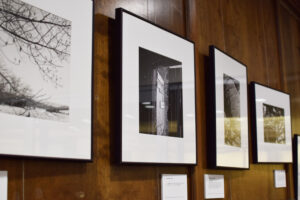 Until Nov. 8, Duquesne students will be able to walk through an exhibit of photographs of Thomas Merton, a notable Catholic monk. Thanks to the efforts of psychology professor William Adams, the exhibit “A Hidden Wholeness: The Zen Photography of Thomas Merton” has been on display since Sept. 16, and will remain in the Gumberg Library until this Friday.

Adams had the opportunity to the photographs while they were on display at St. Vincent College earlier this year, and decided he wanted to bring the exhibit to the Duquesne community.

“It’s traveled all around, even internationally. We’re actually quite lucky to have it here,” Adams said.

While only Merton’s photographs are on display, he is also known for writing several books, along with being an advocate for peace during the Vietnam War. Merton was a spiritual person, practicing Zen Buddhism throughout his life. He was one of the first people to blend the concepts of Christianity and Buddhism together.

Around the same time he began exposing himself to Buddhist ideas, Merton decided to take up photography. A “self-taught” photographer, his photos capture natural scenes, and they are printed in black and white.

“My sense is that he used the camera as a sort of meditative or contemplative tool. His interest in photography coincided with his interest in Buddhism. He appreciated the holiness of everyday things, and you can see that in the photos in the library,” Adams said.

As the exhibition comes to an end, students can also attend a special lecture on Nov. 7 at 6 p.m., on the first floor of the Gumberg Library. The talk will be held by Bruce Soun Harris Rōshi, who has studied the concept of zen, even receiving the title of “esteemed teacher” while studying at a monastery in Kyoto, Japan.

Harris’s lecture, “Seeing Which is Being Which is Acting,” will focus “on awakening in the midst of the ordinary challenges and gifts of being human, and cultivating this wakefulness in our everyday relationships.

Like Merton, Harris has spent much time simultaneously studying Buddhist and Christian practices. The goal of both of these religions is to develop an appreciation for the simpler things in life by using meditation and contemplative prayer.

Having trained with Harris for about 20 years himself, Adams hopes that students will develop a deeper spiritual appreciation during the lecture for the teachings of Harris and Merton. The title of the talk is actually a paraphrase of something Merton said during his time. Harris’s lecture is meant to touch on the ideas expressed through Merton’s photographs that are currently on display.

“It feels to me completely still and really dynamically alive at the same time — vibrating with life. There’s a quality of stillness and vibrance in them. Some are quite spectacular,” said Adams.

The photographs, in conjunction with Merton’s teachings, have shaped the way that the world views meditation and self-reflection.

“I hope students really take the time to look at the photographs, to be touched by the photographs, they’re really beautiful. They really do show the sacredness of everyday life. We [just] skim the surface. You have to slow down … look and let yourself be touched deeply.” said Adams.

Attending the exhibit and lecture is free of charge and open to anyone in the community who wishes to attend.