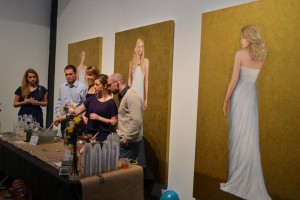 Urbanist: The City Unfolds profiled 152 music venues, boutiques, restaurants and bars in a free, fold-out magazine. It will be published annually and placed in hotels and businesses Downtown and in the Cultural District.

Curator for the Pittsburgh edition of Urbanist Mike McAllister said the magazine will provide a comprehensive guide to the city’s cultural venues.

“All cities have their old favorite places to visit,” McAllister said, “but by having this in hotels, you can encourage people to try something that’s more authentic.”

Urbanist first launched in San Diego, Calif., and expanded to Pittsburgh and St. Louis, whose publication is still in development. McAllister approached Urbanist after seeing the magazine in San Diego and wanting to implement it himself.

“I thought this would be perfect for Pittsburgh,” McAllister said.

McAllister and Editor Dayna Crozier began work on the Pittsburgh edition of Urbanist Magazine in September 2012 and the magazine appeared in hotels and businesses Feb. 14.

The launch party was held on Tuesday at the Space Gallery, located at 812 Liberty Ave. It featured several of the local artists and businesses profiled in the magazine, including Pittsburgh Winery and Marty’s Market.

According to executive chef for Marty’s Market Matt Huggins, being mentioned in Urbanist: The City Unfolds will be great advertising for the six month-old business.

“It makes connections for us,” Huggins said, adding that the magazine will likely connect them to a younger audience that is more interested in their organic products.

Syma Hajian, manager of the Pittsburgh Winery said that Urbanist: The City Unfolds is the only advertising the company does.

According to Huggins, Urbanist will highlight the recent cultural changes in Pittsburgh and promote newer and unknown businesses.

“It used to be such a straight blue-collar steel town,” Huggins said. “Pittsburgh’s stepped up and changed its game to become a prosperous city. It’s young and exciting. There’s a lot of talent here.”

Hajian agreed, adding that the magazine will advertise the city as well as the individual businesses.

“It’s so great for Pittsburgh,” Hajian said. “There are so many people who don’t know how great Pittsburgh is.”

According to McAllister, it is Urbanist’s goal to highlight the cultural changes in Pittsburgh and “grow with the city” as it develops.

“We really want to be on the cusp of what’s happening in Pittsburgh,” McAllister said, adding that some of the businesses profiled won’t open until the summer but were included because of their potential to add to the city’s atmosphere.

Freelance photographer Christopher Sprowls was hired by TEDx to run a photography project at the launch party. He asked visitors to write or draw what they love about Pittsburgh on a white sheet of paper and then took their photos.

Responses included drawings of the iconic bridges and bicycles, the term “pittsburghers,” specific towns such as Lawrenceville, a detailed drawing of a Heinz ketchup bottle and the phrase “the reinvention,” referring to the city’s growth in recent years.

According to Sprowls, these drawings and phrases represent a conversation about what people think about the city.

“Pittsburgh’s such an up and coming city,” Sprowls said. “That’s all you see is students and young people trying to rebuild the city.”

Erik Bass, a General Electric employee, attended the launch party because of his appreciation for TEDx and their events celebrating Pittsburgh innovation and creativity. After hearing about Urbanist magazine, he thinks the publication could be beneficial for the city.

He added that the magazine could be useful to tourists visiting the city as well as people trying to find new and interesting places to visit.

“I think it’s really awesome that people here are open to trying to things,” Bass said. “Pittsburgh is an interesting mix of artistic and industrial and [it] really showcases it well.”

According to McAllister, Urbanist will help people in the city become more aware of the creative and innovative community that it already is.

“We want this to be a catalyst that creates that kind of community,” McAllister said.