By Julian Routh | The Duquesne Duke 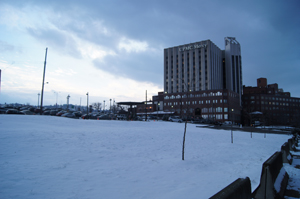 UPMC Mercy began preparations and moved forward with their plan to construct a new power plant and parking garage in close proximity to campus.

Both will be constructed on the hospital’s property next to the emergency department, alongside Locust Street and Boulevard of the Allies and between Marion Street and Van Braam Street, UPMC Mercy Vice President of Operations Tom Gronow said.

“With the long-term development of the lot, those spaces could eventually disappear,” Gronow said. “Looking at this and looking at shuttle costs, it made sense for us to build structured parking.”

The central plant will be four stories tall and an estimated 50,000 square feet. It will house the hospital’s chillers, boilers and emergency power generators, an improvement to when they were originally “haphazardly placed wherever they could fit,” Gronow said.

He added that UPMC wants a central plant that can better fit its needs and house equipment, rather than the 30-year-old infrastructure it is currently utilizing.

“We wanted to upgrade [the infrastructure] and centralize it into one location to improve our energy efficiency,” Gronow said.

Construction will begin in March or April, but could be pushed back to summer if the hospital comes across any difficulties, Gronow said. The plant will take approximately 18 months to build, and if construction of the garage begins simultaneously, both will be completed in about two years.

The project’s estimated cost is $90 million. Gronow said that with health care reform, “the system is looking to evaluate where the capital is allocated.”

An original plan by UPMC that would have closed Marion Street to vehicles was halted by Duquesne because of the problems it would have created on days in which students were moving in, Duquesne spokeswoman Bridget Fare said. Fare also said the University’s relationship with UPMC has been “longstanding and collaborative.”

“We provided feedback and they were very receptive to our concerns,” Fare said.

During the planning process, UPMC has worked closely with Uptown Partners, a community-based organization that aims to build a healthier neighborhood.

“What we want in all that develops here on our corridors are very high quality buildings with vibrant architecture and sustainable features to the design,” McNutt said. “These are big buildings, and we aim to make them more friendly at a pedestrian scale.”

McNutt also said that greening the area around the structure is one of the group’s primary focuses, acknowledging the possibility of a “lovely park” and an abundance of trees filling an open space next to the garage.