It was all hands on deck early last Saturday morning. As sheets of heavy snow continued to blanket the city — and with the sun still nowhere in sight — salt, shovels, snow blowers and snowplows were fighting to merely keep pace with the onslaught. Most of Duquesne’s students were still asleep, unaware, and perhaps most coveted of anything, warm.

This Saturday morning their adversary was winter storm Jonas, which slammed the eastern seaboard the night before. In fact, as the world would soon find out, just 80 miles away sat Duquesne’s men’s basketball team, nine hours into a 22-hour stint stranded on the Pennsylvania Turnpike. Needless to say, this wasn’t just a couple of flurries.

By 6 a.m. the crew on the ground was 25 strong, spread out across the hills, roads, sidewalks and steps of the Bluff. Director of building services, grounds and operations Bill Zilcosky explained that the coordinated effort was thanks in part to the advance knowledge of the impending snow. For winter storm Jonas, planning meetings began the Tuesday before.

Part of the strategy to combat a snowfall lasting for over 12 hours, as it would in this instance, is to start the work early. That means a crew of six working to pre-treat the roads and clear the initial snow all before 11 p.m. on Friday night, Zilcosky said. From there, a handful of overnight staff kept the work going until the full effort started early Saturday morning.

Housekeeping staff member Kim DelPizzo joined in as part of that early morning crew. At around 6:30 a.m. she was taking on the sidewalk and steps in front of the law school, shoveling, salting and snowblowing away the thick layer of accumulation. While her snow clearing operations had only been going on since about 5 a.m., her shift was already in its seventh hour.

“I came in last night, and I slept here,” DelPizzo said. “We started at midnight, because we had a big setup to do in the Union. So now we’re out shoveling.”

It’s hard work, not at all helped by the freezing cold temperatures and relentless wind, but DelPizzo said regular breaks help to ease the chill. Nevertheless, she stressed that each and every person was working as hard as they could to get campus ready for use in the morning — even though some of them had been there for almost 24 hours.

As DelPizzo and her coworkers continued to attack the steps and sidewalks, flashing yellow lights slowly moved by, casting shadows on the law school’s facade. The culprit was groundsman Jeff Henk, slowly making his way down Locust Street in a snowplow- and salt spreader- equipped Ford F-250 pickup truck.

Henk had been systematically plowing up and down the hilly streets since around 10 p.m. the night before. While that may have the added advantage of a nice, heated cab to work from, he acknowledged that the grounds crew does take the brunt of the work during a snowfall like Jonas.

“We wouldn’t be able to do it all,” he said. “We couldn’t do all the sidewalks, steps and everything. So everybody comes out of their buildings, localized, to do their areas. But we do the bulk of the area just because we have bigger equipment.”

The localized areas are divided up by a color-coded system known simply as the “Skittles Map.” Maintenance workers are given areas suited to the equipment they have on hand. Housekeepers are given sections to focus their energy on. White roads return to black, and sidewalks show their concrete once more.

Henk reiterated Zilcosky’s point about the difficulty when it comes to snowstorms lasting a significant period of time. For those like Henk, toughing it out on the ground, continuous precipitation makes the entire process that little bit more difficult.

“When it keeps coming like this, we have to keep on it,” he said. “More people, more equipment breakage, more salt usage. Everything costs the university a little bit more for bigger snows like this.”

Other difficulties? Well, it’s tough to plow snow when students are parked incorrectly, as is often the case on the weekends. It can also be difficult to work around students out walking on the areas needing attention — one more reason to beat the creeping sunrise. 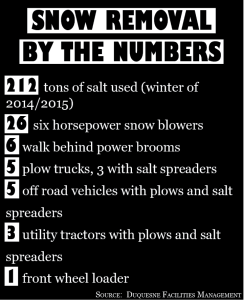 With a fresh hopper of salt, Henk heads back out to continue the job, just as the rest of the team is doing. From Assumption Commons to Academic Walk to the A.J. Palumbo Center, snowblowers, snowplows and shovels diligently chip away at the powder.

Students arose Saturday to waning snowfall and a campus ready to come to life for another day. As the snow petered off, so did the number of staff needed to keep up with the job. And by Saturday night the Bluff was all but cleared.

Just a few days later, with temperatures reaching nearly 50 degrees, the remnants and proof of their handiwork had melted away. That’s okay, though, because nobody is looking for glory by way of shoveling. No, eyes are already on the next big one. And whatever that may be, Duquesne’s crew can handle it.

April 23, 2014 The Duquesne Duke News Comments Off on Our Year in News: A Look Back

By Julian Routh | News Editor The adjunct battle On Sept. 1, adjunct French instructor Margaret Mary Vojtko died from complications of a heart attack, prompting a debate over whether or not part-time faculty is […]

By Andrew Holman | The Duquesne Duke There are approximately 150 talented wide receivers vying for spots on just 32 NFL teams in the 2016 draft class. Each player has a different skillset, background and […]

Students gather at DU for competition

February 6, 2014 The Duquesne Duke News Comments Off on Students gather at DU for competition

By Jill Power | The Duquesne Duke Duquesne hosted over 800 students from 75 schools across both Allegheny and Westmoreland counties this weekend for the 80th annual Pennsylvania Junior Academy of Science Regional Competition. Saturday’s […]