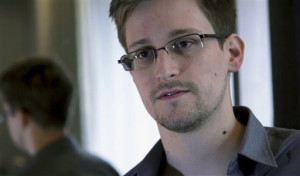 Norwegian parliamentarians Snorre Valen and Baard Begar Solhjell think so. The two nominated Snowden for his disclosure about National Security Agency spying, according to a report from Bloomberg on Jan. 29.

In a letter, Valen and Solhjell wrote, “The public debate and changes in policy that have followed in the wake of Snowden’s whistleblowing have contributed to a more stable and peaceful world order.”

Alfred Nobel himself set the guidelines for the prize in his will a year before his death in November 1895. He divided the prize into five equal parts, four of which are awarded to individuals who made important discoveries in the fields of physics, chemistry, physiology and literature.

The fifth part of the prize is awarded “to the person who shall have done the most or the best work for fraternity between nations, the abolition or reduction of standing armies and for the holding and promotion of peace congresses”

Snowden is now up for consideration for leaking classified documents on NSA spying programs in June. His actions sparked international controversy after exposing the NSA’s method of collecting and storing telephone records, Internet and location records of entire populations in the service of national security.

Snowden told The Washington Post’s Barton Gellman in December that his work is done in an article titled “Edward Snowden, after months of NSA revelations, says his mission’s accomplished.”

“For me, in terms of personal satisfaction, the mission’s already accomplished,” he said. “I already won. As soon as the journalists were able to work, everything that I had been trying to do was validated. Because, remember, I didn’t want to change society. I wanted to give society a chance to determine if it should change itself.”

Don’t get me wrong. War is a bad thing. But a terrorist group hijacked four airline jets over American skies on a sunny Tuesday morning more than 12 years ago and crashed them in various locations across the eastern seaboard, including the Pentagon and the World Trade Centers. That changed things forever.

That morning, two airline jets with full tanks of gas ready for cross-country flights struck the World Trade Centers at 8:46 a.m. and 9:02 a.m. A memorial now stands at Ground Zero in memory of the innocent Americans who died that day. It’s estimated that 1,609 people lost a spouse in the attacks. More than 3,000 children lost a parent. Twenty percent of Americans knew someone hurt or killed in the attacks.

So the narrative goes that the NSA began collecting telephone records en mass in the months and years following the worst attack on American soil since Pearl Harbor.

If you’re doing something illegal enough for the NSA to notice, they find out. That’s a good thing for our country.

Snowden had a problem with the program, and proceeded to leak classified agency documents to the rest of the world in an effort to allow people to decide how they want to be governed.

After President Barack Obama’s Review Group on Intelligence and Communications Technologies released a 304-page report in December offering recommendations for a change in approach to the intelligence program, former acting CIA director Michael Morrell released an opinions piece published in The Washington Post titled, “Correcting the record on the NSA Review,” in which he wrote that the program “needs to be successful only once to be invaluable.”

“Had the program been in place more than a decade ago, it would have likely prevented 9/11. And it has the potential to prevent the next 9/11,” he said. “It also provides some confidence that overseas terrorist activity does not have a U.S. nexus. The metadata program did exactly that during my last days at the CIA this summer, in the midst of significant threat reports emanating from Yemen. By examining the metadata, we were able to determine that certain known terrorists were most likely not in phone contact with anyone in the United States during this specific period of concern.”

As far as I’m concerned, I couldn’t care less if the NSA knew what I had for breakfast, lunch and dinner today. Heck, they can even screen my calls to see what I’ve been up to: I read Twitter, text my friends and family and play Candy Crush.

They can look over my messages and find out where I am at any given point in time. And with the revisions that will likely surface as a result of the outrage Snowden caused, they’ll still be able to do that. They’ll just need court documents first.

Does Edward Snowden deserve the Nobel Peace Prize? I answer with a firm “no,” because all he did was anger a number of people around the world who hate the United States of America.

If these surveillance programs prevent another wide-scale attack on the United States anywhere near the level that the attacks on Sept. 11 reached, or offer intelligence indicating someone is planning something of that sort, I’m all for it. Because 3,000 Americans went to work on Sept. 11 and didn’t come home.

Pat Higgins is a junior journalism and economics major and can be reached at higginsp@duq.edu.

Hallie Lauer | Layout Editor 11/16/17 Students now have the opportunity to follow in the footsteps of alum Michael Hayden, into careers in organizations such as the NSA and the CIA. This is all possible […]

Men of Excellence award given to DU faculty

January 24, 2019 The Duquesne Duke News Comments Off on Men of Excellence award given to DU faculty