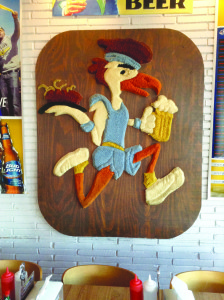 Last semester I scoured the land for best burgers the Burgh had to offer. This semester I plan to take to the sky by finding our city’s best wings. The first stop on the list is Wings, Suds & Spuds.

Located at 8806 University Blvd. in Moon Township, this bar and restaurant features some of the best wings in town.

To be clear about the parameters, I will be looking at all types of chicken wings, whether they are covered in sauce or caked in breading and seasoning. There are three basic elements that I will examine for each wing: the quality of the wing, the cook of the wing and the flavor of the seasoning or sauce.

Wings, Suds & Spuds has a bar atmosphere. They specialize in wings and potato dishes. The service was quick and because we got there around 4 p.m. the place was pretty empty. But if you go during peak bar hours or during a big game, it can get packed and loud.

The noise helps feed into a communal atmosphere that really stems from food being served in baskets that are made for sharing. This is not a date night type of place, but it is a great place to catch up with a few friends.

We started off with an order of onion rings, which my vegetarian friend and I shared. They served as an adequate appetizer. I ordered 10 wings – five with buffalo sauce and five with honey garlic saue. With the sauce you are given a choice of mild, medium, hot and extra-hot. I chose mild for the honey garlic and hot for the buffalo. You also get your choice of ranch or bleu cheese. I ordered spiral fries with cheese to accompany the main course. My vegetarian friend ordered a grilled cheese sandwich and an order of homemade chips.

I ate the buffalo flavored wings first. I was ready for them to be extremely hot, but to my surprise the heat was not overwhelming. Instead my palette was drawn to the flavor. I enjoy a wing that has good flavor with the spice as opposed to just being spicy to burn mouths. The buffalo flavor was great, with its heat was just enough to keep you wanting more. I then had a few of the honey garlic wings. The flavor here was something surprising. It seemed like a dangerous combination, but again I enjoyed them. The garlic flavor was not over the top and the moderation was key to the flavor working. It could have been, like most places, just an overpowering dose of garlic, but instead the garlic was just a hint of the flavor and the honey could be tasted as well.

The buffalo sauce worked and it was my favorite of the two. They have a lot of other sauces and almost all of them are on the same level as these two. 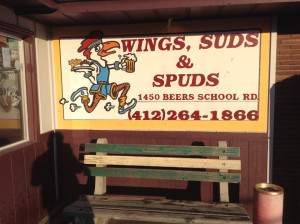 The cook was impressive. A lot of wings are really tender, which can make them too soft. These wings have an initial crunch that gives the wings some substance. They are made with great care and each bite is cooked to the same temperature. The wing is larger than you might expect. The meat itself is high quality, which is important because some restaurants that have good sauces don’t focus on the quality of the meat. The flavor of the chicken can be detected and instead of that flavor fighting the sauce it works well with the sauce. A wing with great sauce that still makes the chicken the star of the dish is a rarity.

The homemade chips really stole my heart. They were cooked with a crunch on the outside but the softness of the potato right in the middle. They were the star of the potato dishes, which is saying a lot because the fries were excellent as well. 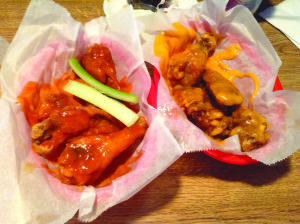 The restaurant is a bit pricey, but it is well worth it. The order of 10 wings was around $11. The total came to about $35 for two main dishes each with a side and an appetizer. I was happy to pay that much for the quality of the meal, but it’s obviously not an everyday place. Wings, Suds & Spuds served me the best wings I have had, although the rest of the semester will provide some new competition that could change that.