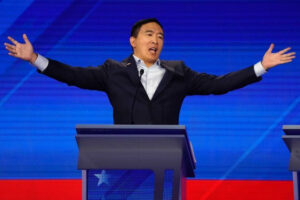 If you thought those surprise television giveaways were only on Oprah or Ellen, the Sept. 12 Democratic Debate in Houston proved you wrong. Hosted and aired by ABC, the most recent Democratic debate fielded 10 of the candidates, including long-time underdog Andrew Yang.

Yang, the business-casual candidate that turned heads at the first debate by opting not to wear a tie has a new thing that is pulling attention.

“It’s time to trust ourselves more than our politicians. That’s why I’m going to do something unprecedented tonight. My campaign will now give a Freedom Dividend of $1,000 a month for an entire year to 10 American families,” Andrew Yang said Thursday night, to the applause of the audience and chuckles from fellow candidates.

This action has brought about various questions of legality and how gimmicky it is, but the most shocking thing seems to be that it worked. Viewers of the debate overall seemed to be pleased or intrigued by Yang’s debate stunt, and it has proven to a bold and productive one.

“All-time traffic high on http://yang2020.com last night. Must have been something I said.” Yang said Friday morning on Twitter. His Twitter also had the biggest overall growth, with Yang gaining 7,566 followers during the debate, the highest of any of the candidates on stage as reported by Politico’s Dan Diamond.

In charts published by FiveThirtyEight regarding debate performance, Yang showed a net positive change in favorability of 2.6% for debate audiences. Yang also had the third biggest improvement in terms of chances against Trump, achieving a 2.4% increase between pre and post-debate polling.

This increasing popularity is occurring despite Yang’s ill-received attempts at self-imposed racial humor. “I’m Asian so I know a lot of doctors,” Yang said on the debate stage while weighing in on healthcare. This joke fell flat with audiences and earned widespread scorn on social media.

The announcement earned praise from other candidates. Pete Buttigieg, mayor of South Bend, Indiana, had to take a moment to compose himself after Yang’s opening statement before stating, “That’s original, I’ll give you that.”

California junior Sen. Kamala Harris, who couldn’t contain her laughter on the debate stage following Yang, said in a CNN post-debate interview regarding the announcement, “One of the things I like about Andrew Yang is he is constantly raising ideas and approaches that have not typically been on that debate stage. And I think he is challenging us to think about how we can be more innovative. And I admire that.”

Outside of politics, Alexis Ohanian, co-founder and executive chairman of Reddit, tweeted “Hey @AndrewYang I like this idea so much I’ll do it personally for those 10 people if you can’t.” Alluding to the questions of the legality of the giveaway, there is currently much debate in the legal realm.

Yang said he had a lawyer confirm that the stunt was legal. Adav Noti, former Federal Election Commission lawyer and litigator for the Campaign Legal Center, said in a CNN interview, “Although it’s hard to say with 100% certainty until we know the details of the payouts, on its face Yang’s proposal to use campaign money to help pay the day-to-day expenses of selected people appears to violate the law… An anti-tax candidate couldn’t use campaign money to pay people’s taxes, and a pro-income candidate can’t use campaign money to give people cash.”

While the debate of legality will likely continue, it’s obvious that this was an effective move on Yang’s part. Earning praise from other candidates and being the top earner of internet traffic, it’s sufficient to say that Yang was a spotlight candidate despite his limited speaking time and news coverage focusing on the big three of Joe Biden, Elizabeth Warren and Bernie Sanders. Yang increased his brand awareness through his Oprah-like giveaway, and his innovative approach has resonated with a lot of people.

That being said, Yang still has far to go before becoming a top candidate. He has come far, but not far enough to compete with heavy hitters like Warren and Biden. While his momentum is carrying him and he is showing improvement, we will see how long that’ll last as the campaign season continues and becomes more competitive as the field narrows.

If Yang wants to continue making big gains, he’s going to have come up with other creative ways to grab people’s attention. Given how Yang has handled it so far, we likely have more to see from this creative entrepreneur.