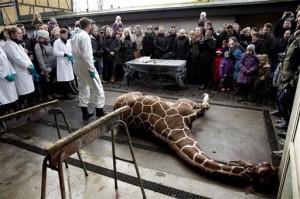 A particular giraffe named Marius has been making headlines and stirring up some controversy in the world of zoos and animal rights. The baby giraffe in question was slaughtered in the Copenhagen Zoo in Denmark because he was extraneous. I have always been a lover of animals; it was an obsession when I was young. However, I’ve never thought of myself as an animal rights activist of any sort. And yet, this event got me thinking about the existence of zoos. How could a living thing be considered extraneous? Was there really no other option for him?

In this case, Marius was killed to prevent unfavorable breeding within the zoo’s giraffe population. Since Marius was a growing baby, he posed the threat of inbreeding. Inbreeding would likely cause the gene pool to trend in an unwanted direction. The Copenhagen Zoo’s solution to this problem was to publicly kill off the baby giraffe by shooting and dissecting him, then feeding him to the lions. Literally. A crowd of adults and children watched the performed autopsy.

First, it must be understood that zoos allow the preservation of some species that would otherwise be endangered. In order to keep their populations as healthy as possible, every zoo participates in some type of birth/population control.

Most zoos in Europe do not use prescription drug contraceptives, which is why this wasn’t an option for Marius and his giraffe family. In a recent USA Today article, the director of the World Associations of Zoos and Aquariums explained that European zoos like their animals to conduct behaviors as naturally as possible. American zoos on the other hand, do use contraceptives, despite past findings that they cause some health defects in the animals such as cancerous tumors.

In my thought processes, I found myself unable to fully agree with either the European or American ways of population control in zoos. Both are flawed in my opinion, wild animals being medicated or killed for the preference of humans is outrageous and inhumane. The entire structure of zoos and how they control and exploit animals is disrespectful.

I came to this conclusion by going back to some basics—this brings you to the heart of the issue. Suitably, the core purpose of zoos has to be addressed. If the true purpose of running a zoo was to preserve, protect, and nurture important and endangered species, then zoos would not be operating in the manners that they do today.

Zoos are an unnecessary spectacle for human enjoyment and they exploit animals. Even though some zoos rescue animals that cannot function in the wild, they certainly do not create an ideal habitat for these animals to live the rest of their lives. With small, unnatural, and confining exhibits, the focus in zoos is clearly not on the animals at all. Even the use of the word “exhibit” reveals the real goal in zoos. That goal is to create an attractive and accessible stage for the animals to be stared at so that the institution can make a profit off of the world’s excitement and curiosity about wild animals.

As responsible humans, we need to start including animals in our canon of those livings things that deserve the most basic rights—life, death, and abuse protection. After all, these animals are sentient beings, which means they have the ability to feel pain, both physical and emotional. I’m certainly not suggesting that we give them the right to vote, but I am pressing that we give them the right to life, whether it be a reproductive one or a life spent simply grazing alone.

I believe even the simple act of working at a zoo or running a zoo puts someone in a very tough position. By default, these people have claimed responsibility for the care of these animals. To kill them off because they were an extra being is to ignore the entire effort to preserve animals; a complete contradiction.

What could have been done instead, to prevent the unwanted breeding, would be to send Marius to another zoo or a wildlife reserve to live out his years. Just because he was unwanted in his original place doesn’t mean he had to be put down. This goes for all zoos practicing this type of control. If it is too expensive and troublesome to do this for unwanted animals, then it seems to me that zoos have failed their responsibilities in yet another manner, because it should be made easy for this alternative to exist.

A claim for a zoo’s educational value can be made. This is a perfectly sound concept—that seeing a real live wild animal can aid in the educational process. Still, this does not excuse wrong treatment. Further, a proper habitat would even help keep the education about these animals accurate. A safari, for example, educates the public on wildlife in a better way because these animals are seen in their true natural environment. So instead of a small and synthetic exhibit, a more suitable habitat would be both beneficial and preserve the educational value that many people might argue in favor of zoos.

Another argument that could be made is that Marius very might well have been killed and eaten by a lion in the wild, anyhow. This is a strong possibility, but any hypothetical is irrelevant in these discussions. Since the healthy Marius was killed by the hand of humans because he wasn’t preferred for their breeding wishes, it is clear that human beings have completely clashed with the natural food chain.

Not only have humans clashed with nature’s hierarchy and course here, but they have fully immersed themselves in an immoral institution. Not only does this contradict the Copenhagen Zoo’s claims for allowing natural behaviors to unfold in its facility, but brings about the questioning of why zoos really exist and if their functioning aligns with their claimed goals of animal preservation.

AP – Marius, a male giraffe, lies dead before being dissected, after he was put down at Copenhagen Zoo on Sunday, Feb. 9, 2014. Copenhagen Zoo turned down offers from other zoos and 500,000 euros ($680,000) from a private individual to save the life of a healthy giraffe before killing and slaughtering it Sunday to follow inbreeding recommendations made by a European association. The 2-year-old male giraffe, named Marius, was put down using a bolt pistol and its meat will be fed to carnivores at the zoo, spokesman Tobias Stenbaek Bro said. Visitors, including children, were invited to watch while the giraffe was dissected. (AP Photo/POLFOTO, Peter Hove Olesen)  DENMARK OUT

By Brandon Addeo | The Duquesne Duke Students and faculty brought their expired and unused prescription drugs to Duquesne Sept. 26 for safe disposal as a part of National Drug Take Back Day. Take Back […]

By: Catherine Clements | Student Columnist  “Other” is the dumping ground for what one cannot categorize elsewhere. How many times in life do we, as a society, check this box? January 2016 marks a new […]

By Julian Routh | News Editor The number of liquor law violations on campus increased again in 2012, according to the public safety department’s annual security and fire safety report. There were 460 reported liquor […]