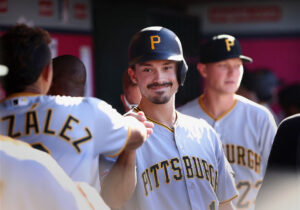 Victor Decolongon / Getty Images | Pirates’ outfielder Bryan Reynolds is congratulated by his teammates in the dugout. Reynolds finished the 2018 season with 154 hits.

Major changes were made in the Pirates clubhouse immediately after their disappointing conclusion to the 2019 season. The Pirates that we last saw in late September may look much different come Opening Day in the Spring.

Just days prior to their final game of the season, it was confirmed by the Pirates organization that longtime manager Clint Hurdle would be back for the 2020 season. However, following the 3-1 loss in the final game to the Cincinnati Reds, it was announced that Hurdle and the Pirates had decided to part ways after nine seasons together. His tenure included three straight playoff berths from 2013 to 2015.

Hurdle has been one of the most successful managers for the club in the past several decades.

In 2013, Hurdle led the Pirates to their first winning season and playoff appearance since 1992. Hurdle led the Bucs to a Wild Card win against the Cincinnati Reds and was also awarded NL Manager of the Year that season.

Although Hurdle had managed to find success early in the decade, the team had a slight collapse after 2015. From 2015 to 2019 they had one winning season, and it was only three games above .500.

After four straight seasons of disappointment, all eyes were on owner Bob Nutting. Many were calling for him to sell the team or fire some high ranking employees within the organization.

Nutting was forced to make a change in the weeks following Hurdles departure. He fired both general manager Neil Huntington and team president Frank Coonelly.

Unfortunately for Neil Huntington, he was only given a certain amount of money to allocate to players. Did the Pirates’ problems lie with his questionable signings and trades?

Those definitely played a part in the decline of the Pirates, but with one of the lowest payrolls year after year, it is hard to compete with teams like the Yankees or Dodgers who have all the resources available to them.

“This is an important step forward for our organization,” Nutting said in a press release. “Ben has an incredible track record of success, having been a part of three World Championship teams in Boston, one as general manager, and setting the table for a fourth. His passion and ability to identify, infuse and develop talent at every level, including at the Major League level, is exactly what we need to be successful in Pittsburgh.”

Nutting also hired former Penguins employee Travis Williams as president. This move was the most obvious of the bunch. Williams is a perfect fit for the team, as he knows about how much pride Pittsburgh has for its teams and additionally brings decades of experience in sports management for the team.

Lastly, the person to take the position of field manager is Derek Shelton. Shelton brings a complete different energy to the team. He is much younger than Hurdle, and is given his first shot at managing a major league team in 2020.

He has spent the last two decades coaching several teams, most recently as bench coach for the Minnesota Twins.

Following the Pirates last place finish in the NL Central last season, the pressure for the team to succeed is at an all time high.

After giving fans the thrill and joy of baseball being played in Pittsburgh in October, it has been heartbreaking for fans to see them resort back to their below average play seen in the 2000s.

This is not a time for the Pirates to stand still and see what happens with this current roster. They must make moves in the offseason before it is too late and the 2020 season becomes a train wreck.

With the loss of their ace Jameson Taillon, the Pirates pitching staff is weak. To go along with the abysmal rotation, there isn’t yet a solid option at catcher.

After choosing to not bring back Elias Diaz, who appeared in 101 games for Pittsburgh last season, the Pirates seem content to use Jacob Stallings as their starter behind the plate.

Stallings primarily served as Diaz’s backup in 2018, and has only played in 95 big league games since getting the call to the show in 2016.

As for the rest of the lineup, Bryan Reynolds and Josh Bell could be some of the only stars on the team this year. Starling Marte publicly made comments about his future with the Pirates in November.

Translated from Spanish, Marte said, “They [the Pirates] have the power to decide about my future. If it was for me I will leave for a team that is ready to compete right now on a World Series and that’s not our case.”

The usual narrative of the Pirates being conservative and not spending money on star players must change if they want to compete with the other teams in the NL Central, let alone the MLB.

Pirates fans shouldn’t expect a playoff appearance in the upcoming season. This team is in serious rebuild mode and they’re just getting started. They’re one of the only clubs who have yet to spend money on free agency this winter.

Best case scenario this season is fixing the toxic environment in the clubhouse and let the players and fans know that this team is serious about competing for a World Series title in the next few years.

If the new updated clubhouse is a disaster, Nutting should consider selling the team to someone more competent and be willing to spend more money on the payroll. Many fans would do anything to just see “Buctober” one more time.

Bryanna McDermott | Assistant Photo Editor The spectacle is viewed by millions at home annually on ESPN, in-person at the beautiful complex in Williamsport and even inside clubhouses across Major League Baseball. This year, the […]

Markus Schulz: North American Scream 2 Tour April 17, 9 p.m. The DJ will perform at the Altar Bar in the Strip District. Also performing is KhoMha. Tickets are $20 in advance or $25 at […]

In order to see change, fans must take stand

January 18, 2018 The Duquesne Duke Columns, Sports Comments Off on In order to see change, fans must take stand