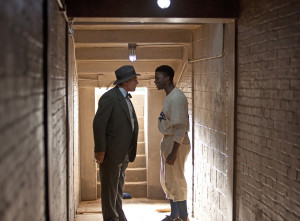 With the baseball season upon us, Hollywood delivered a terrific film to mark another season of America’s favorite pastime: 42.

The film focuses on baseball great Jackie Robinson’s signing with the Brooklyn Dodgers and success as the first African-American Major League Baseball player. In addition to its historical and social significance, the film shows a side of America’s history and sports that has been rarely depicted, if at all in cinema – 42 is an artistic success, through its terrific design and casting.

From the visual standpoint, 42 is a gorgeous recreation of Post-World War II America. The sets and locations are vibrant, creating a level of quality that I hope future films set in the same time period (such as the new Captain America film) will be able to meet.

Completing the illusion is an expertly crafted soundtrack that includes songs from Cole Porter, Count Basie and Billie Holiday. The songs are not solely overlaid over the film, but appear in-camera as well, such as when a character turns on the radio in their home, or in the car.

The illusion would be lost, however, if the actors did not contribute performances rich enough to reinforce it.  In the case of 42, the roles of Robinson (Chadwick Boseman) and Branch Rickey (Harrison Ford) were the determining variables, as the film is built upon their relationship.

As expected, Boseman delivers a performance that honors Robinson’s legacy; the surprise of the film, though, lies with Harrison Ford. He is almost unrecognizable, due to the layers of makeup (and possibly prosthetics) that were applied to make him look like his historical counterpart. Ford uses this alienation to deliver one of his best performances: it is worth the price of admission alone. What is unique about his performance and the narrative of the film is that they create a parallel between Robinson’s suffering and that of Christ and the celebrated Saints. For Robinson, success meant enduring humiliation and degradation on the field, as well as a rising tide of violence.

This characterization results in one of the film’s few flaws: the lack of baseball.

The games recreated in the film focus on the ongoing struggle against racism, and a result, an incomplete portrait is supplied to the viewers of Robinson’s exceptional abilities. Missing along with this information is a sense of baseball game; allow me to elaborate. Trouble With the Curve, a recent baseball centered film, focused on a particular individual in the industry: the recruiters. Thus, while the film focused on Clint Eastwood’s character’s interactions on the stands, one felt like they were attending an actual ball game, due to the progress and carefully arranged intercuts to the actual game. 42 , does not supply this arc, and as a result, viewers are provided with a fragmented experience. Again, I recognize the characterization required the diminishment of the actual games; I wish they had expanded them to provide a better recreation on both accounts.

My last complaint with the film is a minor one: the occasional unnecessary use of exposition. In terms of the storytelling, 42 does a good job in supplying multiple viewpoints and makes it easy for the viewer to follow. However, there are scenes that would have benefited from showing, instead of telling: the one that surfaces is when Robinson supplies a monologue to his sleeping newborn about how his father abandoned him and his family when he near the same age. Even though the dialogue is good, it drains some of the power of the scene, as this plotline could have been manifested earlier in the film, but, without having to have been explained.

I have to reinforce: the complaints I have are nothing more than minor paint imperfections on an otherwise smooth vehicle.