Valentine’s Day is special for some Duquesne faculty and staff who work with their sweethearts and some of whome work only a few doors down from them. 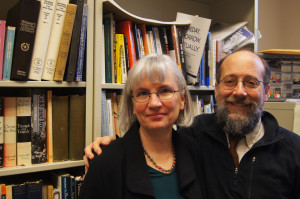 Political science professors Charles Rubin and Leslie Rubin have been married for 32 years and have worked in the same universities for their entire married lives.

“I don’t know what it would be like to teach at different places,” Leslie said.

While they raised their two children, Leslie worked as an adjunct professor for 18 years, while Charles worked as an assistant professor in political theory and public policy. Leslie is now a full-time professor applying for tenure.

“It worked out because we raised our children during that time,” Leslie said. “Duquesne has been very good to us in that way.”

According to Leslie, she and her husband’s parallel careers were not intentional and arose out of limited jobs in academia.

“There are very few jobs available in political philosophy in any given year, so you just apply for what’s available.”

Charles agreed, adding that they are lucky to both work in their chosen field, and especially lucky to do so together.

“Academics are doing work that they love to do, and I feel that is very rare in many other fields,” Charles said. “For us, it’s not just what we do, it’s who we are, and that’s a rare thing.”

According to Leslie, one of the greatest benefits of their parallel careers is the flexible scheduling. When their two children, Anna, now 21, and Ted, now 24, were young, Charles and Leslie could alternate workdays to always have a parent home. Now, the couple works similar schedules and carpools daily.

“It has allowed us to have a very homogenous schedule. We don’t have a conflict of obligations,” Leslie said. 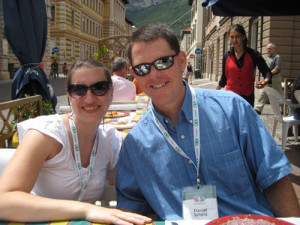 Theology professors Anna Scheid and Daniel Scheid work two doors down from each other. They have been married since 2006 and have worked together at Duquesne since 2007.

The couple agreed that working at the same university allows them to better manage their time while they care for their two children, Henry, 5, and Claire, 2, and prepare for their third child’s arrival in May.

“If I’m not working and I want to spend time with the children, I can do that because I can make up that time on the weekends,” Daniel said. “He also enjoys summers off when “the four of us get to spend a lot of time together.”

The couple met during their graduate theology program at the Catholic Theological Union in Chicago and received their doctorates from Boston College.

“We’ve been in the same institution doing the same things since we met,” Daniel said. “It’s very natural to us … It would be weird to be married to someone who didn’t do what I do, who I only saw at morning and at night.”

According to Daniel, one of the greatest benefits of working with his spouse is a mutual understanding for the challenges and successes they face.

“For me, I think it’s nice that I have someone I can discuss with what’s going on at work who actually knows,” Daniel said.

Anna agreed, adding that she enjoys spending the extra time together commuting and eating lunch.

“I also like that we are able to process our work lives with each other really easy – we always understand what the other is talking about when it comes to what is going on at work,” Anna said in an email to The Duke.

Working and studying at the same institutions has made their high level of interaction very normal, Anna said.

“We have been in the same working environment since graduate school so it would almost feel strange to us not to work together,” Anna said.

For both the Scheids and the Rubins, Duquesne has become an important center of their family lives for them and their children.

According to Leslie, the Rubins’ two children were often watched by Duquesne students while the couple worked.

“My children ran around these halls when they were growing,” Leslie said, adding that her daughter was often treated to pizza from the Off-Ramp restaurant by some of the students. “That was a big treat for her.”

The Scheids brought their children to the University when they were infants and hope to bring them back once they are old enough to sit in the classrooms and watch them teach without distracting them or the students. They are currently babysat by a Duquesne graduate student while the couple teaches.

Despite the fact that both married couples work in the same field, neither felt that there was any competition between them and their spouse. Instead, they enjoy helping each other through difficult steps such as dissertations, publications and presentations.

“[Competition] is just not part of what being married is about, as far as I’m concerned,” Charles said, adding that he and Leslie are able to enjoy each other’s successes and sympathize with any failures.

“We know when the rough times are expected to come and they’re the same rough times for the both of us,” Charles said. “It makes for a very tight relationship when you are on the same page together.”

According to Daniel, the only problem with working with a spouse is that it is sometimes difficult to separate home and work life.

“I can always discuss work,” Daniel said. “Sometimes we have so say ‘Ok, no more work talk. Let’s talk about family.’ For other people, I imagine it’s easier to separate the two worlds.”

Overall, Daniel said that he enjoys working so closely with his spouse, even though the arrangement may not work for every couple.

“I know I have some friends who say they could never work with their spouse. They want to keep their home and work lives separate, but for us I think that’s part of the fun,” Daniel said.

“I would be hard-pressed to find what the drawbacks are,” Charles said. “I think that we’re very lucky to be in the academic world and very lucky to have jobs together.”

01/25/2018 By Ollie Gratzinger | Features Editor On an unseasonably warm Sunday morning, the streets of downtown Pittsburgh began to fill with a united and diverse crowd. The City that Always Sleeps had seemingly woken […]

Duquesne News — On Nov. 1, Duquesne’s men’s basketball team will host D-III Chatham University in an exhibition match at A.J. Palumbo Center. All proceeds from the event will benefit the United Way’s hurricane relief […]

Football team back in win column after topping CCSU

October 8, 2015 The Duquesne Duke Football, Sports Comments Off on Football team back in win column after topping CCSU

By Joseph Sykes | Sports Editor It’s been a tumultuous past few weeks for the Duquesne football team after it dropped two back-to-back games to Albany and Dayton on the road. Despite those stumbling blocks, […]