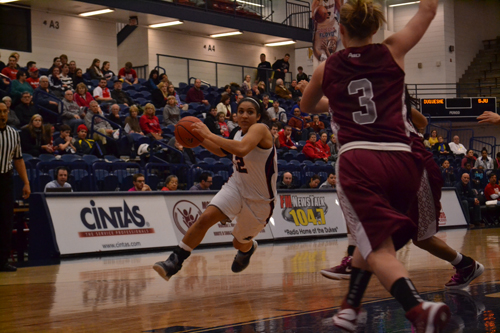 If a team was trading you one point for two or three points each possession, why wouldn’t you foul all night?
This is exactly what happened to the Duquesne women’s basketball team as they fell to St. Joseph’s 69-68 in overtime Wednesday night at the A.J. Palumbo Center, bringing them to 5-38 against the Hawks all time.
The Dukes dominated overtime until 1:23 was left on the clock. At that point the Hawks leading scorer senior forward Chantil Van Grinsven cut the lead in half. Junior guard Erin Shields gave the Hawks a 67-66 lead with a clutch 3-pointer. Ahjah Hall, senior guard, gave the Dukes the lead back, but they were not careful with it. With 18 seconds left, Van Grinsven, who finished with 19 points and 15 rebounds stepped up to the line and knocked down two free throws to end the scoring. The Dukes had 18 seconds to score but had the ball go out of bounds twice and only managed one shot.
The Dukes struggled mightily in the first half. They shot two-of-11 from behind the arc in the first half. They were outscored 14-10 in the paint. To make matters even worse for the Dukes they got into foul trouble early. They committed 10 fouls in the first half, which allowed the Hawks to go 9-of-11 from the free-throw line.
The second half meant more of the same for the Dukes until 14:42. A foul was called in the paint and then chaos ensued. Wumi Agunbiade, a junior forward who was in foul trouble early and fouled out with less than two minutes remaining in the game, was shoved well after the whistle and junior guard Raegan Moore retaliated and they each received technicals. These heated moments resulted in an eight-minute delay.
The Dukes then climbed their way back into the game and with 3:56 left in the second half junior guard Orsi Szecsi hit a three to pull the game to within five. On the ensuing possession Szecsi landed awkwardly on her shoulder dislocated her shoulder. Before play was stopped senior guard Vanessa Abel hit a three-pointer that pulled the Dukes within two points. The Dukes had a two-point lead with 23 seconds left, but let the Hawks back in the door, allowing them to tie the game with six seconds left.
Coach Suzie McConnell-Serio described the up and down emotions of the game.
“It was a great sign when we got the lead, but we couldn’t get the stop,” McConnell-Serio said.
The Dukes suffered from the free-throw line. They finished the game shooting 48.1 percent from the line, including when the Dukes shot 4-of-4 in the overtime period. Coincidentally the Hawks also had 27 free throw opportunities, but they hit 20 of them giving them a clear advantage.
Abel was upset about the performance from the free throw line.
“We just look at the foul shots,” Abel said. “They are going to haunt us.”
The Dukes were led by Jocelyn Floyd, a senior guard, who had team highs 18 points and 7 steals, and 6 rebounds. Freshman point guard April Robinson, fresh off of her third Atlantic 10 Rookie of the Week award, had 12 points. Abel and Szecsi each had 10 points.
Floyd said the team was trying to move on.
“We just said we have to pick our heads up,” she said.
The Dukes now head to No. 18 Dayton to play in a nationally televised game Feb. 18 at 9 p.m. on CBS Sports Network.

Photo: Emily Gorham / The Duquesne Duke
Jocelyn Floyd goes up for a layup for the Dukes, who lost 69-68 to St. Joseph’s in overtime.