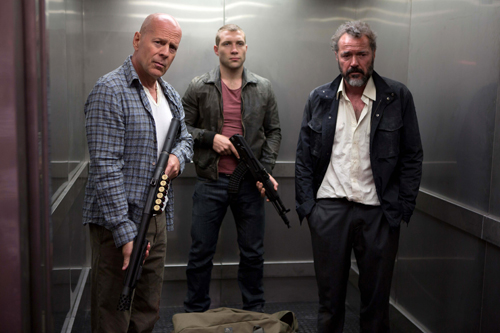 A Good Day to Die Hard is one of the worst films committed to celluloid or hard drive, pending the industry’s conversion to digital recording and projection.

This is not one of the bad films that is an enjoyable view, such as The Room, but, a film whose poor craftsmanship has turned it into the cinematic equivalent of a black hole, taking away laughter and enjoyment. The Die Hard films are not fine cinema. Like cheeseburgers, they are simple in creation and construction, and appeal to consumers who can stomach something that is simple, mass-produced and an unhealthy, but is an enjoyable pleasure. Yet, A Good Day to Die Hard failed to meet the bare requirements for what constitutes a cheeseburger and its cinematic correlative, an action film.

The largest and most damaging defect to the film is the narrative. I would call it incoherent, but, I managed to extract some shoestring plot about assassinations, uranium trading and a retelling of what happened at Chernobyl. Already, the film is on a locked course for the Razzie Awards (worst film awards), due to a story that is mostly nonexistent, but, when present, does not make sense. Atop of this dumpster-plucked narrative, is blatant xenophobia (dislike or fear of people from foreign countries) and what I would like to call Russian-bashing: it makes Boris and Natasha from Rocky and Bullwinkle look politically correct. What I find equally offensive is the decision to retell the story of the Chernobyl Meltdown, which is still damaging lives to this very day.

But, this is a staple of the screenwriter, Skip Woods. In X-Men Origins: Wolverine, another film he wrote, he retold the Three Mile Island disaster, as well. That raises the question of what to expect in his next film: what next, the 2011 Fukushima Meltdown?

As a result of this frustrating storyline, the characters are either cardboard cutouts or have arcs that are inconsistent. Just when it seems the damage cannot worsen from the irritating bridges between gun battles and chase scenes, one of the characters opens their mouths, and one’s ears start bleeding from the lines, which seem to have been transcribed from a bunch of fourteen year olds playing Black Ops on XBOX LIVE. So, it is a very sad day that when John McClane delivers his signature line, audiences do not care, and it lacks the punch it had in other films (I think Willis intentionally made it sound like a eulogy for his character, who should be laid to rest after this film, unless Roberto Orci and Alex Kurtzman are given the chance to redeem the series.)

To reiterate the story, dialogue and characters could have been snatched from one of the worst fan fiction pieces on the internet. Its cinematography is another issue all together. A Good Day to Die Hard is a visually nauseating film, due to the shaking camera and over-reliance of zooming in on subjects. Now, I do not know who determined the style, whether it was the director and/or director of photography, but, it looks like it was shot by a nine year old given a video camera for the first time.
Now that I have listed everything that is wrong with the film, I do have to list what worked, as I do not want to ignore what did work. First on the list is the cast, who did their best to build something out of characters thinner than cardboard. Secondly, the design departments excelled in the film: the sets are dressed, lit and in some cases, color-corrected beautifully. I wish there could have been time to savor the terrific sets, but, the impulse was to destroy them completely in the shortest amount of time. In addition, the score was very good, as I have one section of it playing in my mind as I write this review. At last, but not least, Bruce Willis makes the film viewable, when the camerawork, dialogue, and story try to counter his efforts. In conclusion, I award the film a star for the excellence in the prop, costume, and other design departments, alongside the music. But, I will add one additional star for Willis and the cast, who tried hard to save the film, which part of me still wants to rate a zero out of five stars. Now, this kindness by no means advocates seeing the film. There are better ways to invest 97 minutes of one’s life.

I am going to spend mine and another half hour rewatching the first Die Hard.