This is not a poetry slam or recital. This is Articulate Live and it is something entirely new. 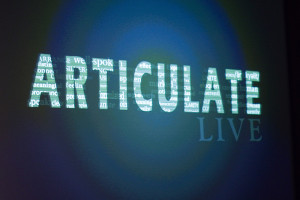 From the mind of junior broadcast journalism major Randall Coleman, Articulate is performance poetry – a staged show that gives a platform to artists that are brave enough to bare their souls to a theatre full of friends, family and complete strangers. The players of Articulate Live invite you to come down on Sunday, stay awhile, and share in this event.

The show brings together talent from different areas of the poetry genre. The goal of the show is not only to entertain, but to inspire, according to Coleman.

“Here in Pittsburgh, poetry isn’t as prevalent,” Coleman said. “People just don’t talk about it as much.”

Articulate Live wants to change that.

While Articulate Live will be held on Duquesne’s campus, it is being offered as a community event. Duquesne students Erinaya Soniregun and AJ Lee Abston will be sharing the stage with Pitt students Tyler Rankin and Kara Elyse and local poets Kallai Lennin, of Clarion, and Don “Church” Gordon, of the North Side. Coleman hinted that there may be more performances than advertised.

“We hope that it will be a really expressive event,” said Rankin, senior communication major at Pitt. “Quality. That’s what it’s all about.”

Rankin started writing poetry at age 9 and remembers receiving praise from a teacher on a haiku he had written. From there, Rankin’s interest in poetry grew. He frequents open-mic nights and performs around campus. While poetry performance is nothing new for Rankin, he is excited about the “nice atmosphere” of Articulate Live.

Articulate Live is an adaptation of the Articulate video series from Duquesne Student Television. The recorded show is a simple, monochrome clip of an artist sitting in a dark studio and giving a performance. These videos can be found on DSTV’s YouTube channel, DuqTV1.

Articulate is originally Coleman’s project. He draws inspiration from Def Jam Poetry and has injected his flair for multimedia production into that layout. He began Articulate as a challenge to himself to construct something as well as to create a medium for artists to express themselves.

Articulate Live is an extension of the recorded show. The stage is simple. A microphone stand centers an empty stage where the main curtain remains closed. Two screens will hang on left and right stage where the word “Articulate” will remain projected throughout the show.

The show will be an intimate experience. There will not be any gimmickry that comes between the performer and the audience. 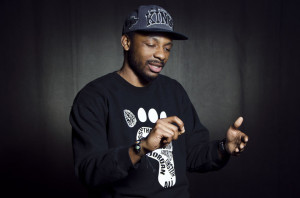 “It’s exciting from the perspective of the performer,” said Don Maue, director of Computer Support Services at Duquesne and one of the leading contributors to Articulate Live.

Coleman and his team have prepared an auditory as well as visual experience. The show provides a design that sets it apart from a poetry reading. The audience is sure to be engaged from the first word to the final bow.

“A solo poem has to be one of the most vulnerable things,” Maue said. “To have an event where the audience can share in on that vulnerability… that’s awesome. That’s where life happens.”

The success of Articulate Live hinges on the framework laid by the production team. Coleman has brought together his “Avengers” squad to create Articulate Live. Coleman brought on Maue in the early stages of the project and he has been critical to the construction of the show.

John Lang, director of the Red Masquers, has also contributed heavily to the project. According to Maue, if it were not for Lang’s support Articulate Live would have had to been staged “in a hallway in Towers.”

Coleman says he follows Steve Jobs as a guide when working with his team.

“I had a blueprint of my vision and then they would throw something at me that would completely change it and it makes it ten times better,” explained Coleman. “Steve Jobs, in an interview said, ‘the best idea wins.’ That’s all I think of. It’s not about my ego or your ego. If it’s the best idea, it’s what will be displayed.”

Coleman and his team are looking to put on a “pro-level” show. They have rehearsed the show repeatedly and are confident for a good showing this weekend.
“I want people to be ready to experience great poetry,” Coleman said. “You will be entertained, you will be moved in every which way. It will be fun, you will be fed, and it’s all completely free.”

Articulate Live will begin at 7 p.m. and will be held in the Peter Mills Auditorium in Rockwell Hall. Admission is free and there will be complimentary food served at 5:30 p.m. 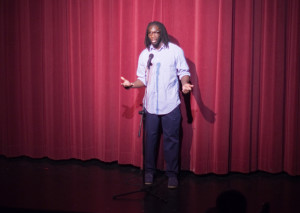