By: Sam Leon|For The Duquesne Duke

My entire idea of the taco had been shaped by years of cafeteria food, street stands and mediocre Mexican restaurants. Just as I had begun to push the item off of my immediate palate, a friend from work recommended I check out Yo Rita, and the taco became something new to me again. I almost feel guilty calling these tacos because they truly deserved to be elevated. 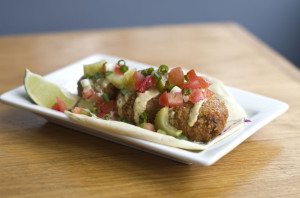 This place is pushed a bit away from the restaurant-dense area of East Carson, at 1120 E. Carson St., and the exterior window art revealing a scantily clad, raven-haired woman makes it look like another tattoo shop.

Take a chance on it and step inside. Your attention will be immediately drawn to the L-shaped bar taking up the whole right side while fifteen tables fill the rest of the space and a dim lights illuminate the restaurant’s gray-scale design.

When I sat down, I was immediately given a serving of tortilla chips with two sides of salsa—one mild, one on the spicier side. Most of their ingredients are either organic or locally grown and are far from the usual found in the Pittsburgh dining community.

The higher-quality ingredients and construction don’t exactly come at a low price. The tacos à la carte cost between five and ten dollars and they’re smaller, so you’ll probably need to order more than one.

Some of the ingredients are so foreign that a glossary is included at the end of the menu to define the most unknown items. Examples include “Hearts of Palm, ” which are the inner cores of a palm tree, and “Aji Amarillo,” a hot Peruvian yellow chile pepper.

Even the main ingredients of the tacos are far from the usual beef, pork and chicken. Instead, you can find calamari, duck breast and salmon. All of these seem grandiose to be adapted to such a simple item such as the taco, but the execution and quality makes the cross seamless and surprisingly delicious.

Don’t get deterred by the quirkiness—you can still find those classic ingredients, but with a twist at Yo Rita. Instead of beef, there are skirt steak or lamb options. For pork lovers, try the roasted pork loin or, if it’s on special, the pork belly.

Other than tacos, Yo Rita rounds out the dining experience by offering an interesting appetizer menu, ceviche options and an unusual drink selection from their bar.

Included on the starting menu is the restaurant’s version of grits, a Mexican soup dish called “Albondigas” that can be made vegetarian or with bison meat, seasonal salads, cornbread and slaw.

The soup du jour deserves attention, too—in the past they have featured a carrot and ginger rendition and something called “sunchoke,” which is an underground vegetable that acts as a root for a variety of the sunflower.

After exploring the menu, I ordered the Wallflower taco ($6) and the Santa Cruz style fish taco ($8). The Wallflower was a stretch from my comfort zone but I had try to it after reading the description. This taco boasts actual sunflower as a component as well as cauliflower, broccoli and lemon curry aioli. I’ve never enjoyed cauliflower, but the way the ingredients were cooked made me forget that I was eating vegetables and flowers at all. While the Santa Cruz and its version of the fish taco taco was great. The batter was light and the toppings, consisting of pico de gallo, crema, avocado and some cilantro, worked well together.

As for the wait staff, one of the servers came off as dismissive and sitting at a table proved to be only an average experience. If you talk to some regulars like I did, some of the waiters are notorious for being a bit rude. Luckily, the food takes all the attention here.

For the best service, I highly recommend sitting at the bar even if you’re not having drinks. According to a regular customer I spoke to, when the entire restaurant was scrambling on a busy weekend night, the bartenders were still providing an excellent, fast and friendly environment.

The bar offers an impressive selection of craft beers and concoctions made with a variety of tequilas. The wine list is anything but ordinary—containing fruity versions of the drink originating from California, Argentina, Spain and Portugal.

Yo Rita is a great choice if you’re looking for quality and innovation and if you’re willing to take a small step out of a typical price range. It’s a nice option for a smaller appetite and has something for vegans, vegetarians and meat lovers alike. You don’t have to be the most adventurous eater to try this place, but it’s always nice to be surprised by or introduced to a new ingredient.

February 13, 2020 The Duquesne Duke Opinions Comments Off on Public fears and anxieties over GMOs growing old

2/13/20 Hannah Boucher | Staff Columnist Genetically modified organisms (GMOs) are not as new of a concept as many would like to believe. While it has been a controversial scientific advancement since the 1970s, when […]

By Duke Staff According to Pittsburgh police, the South Side is on its way to becoming a safer neighborhood. But does the word safer lend the same meaning as safe? Lt. Larry Scirotto recently spoke […]