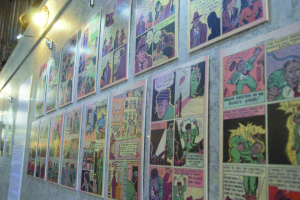 In honor of Black History Month, ToonSeum, Pittsburgh’s cartoon museum of art, has put together an extensive exhibit inside Downtown’s City-County building showcasing the historic artwork, photographs and memorabilia of three African-American artists local to the Western Pa. region.

The exhibit, titled Beyond the Funny Pages: The Works of Art and Life Captured in Comics, features dozens of comics, blown up in size that line the hallways of the City County building’s first floor.

The comics are then separated by the artist who drew them, where viewers can also read a short biographical piece on their local upbringings and learn about the historical significance to black history and Pittsburgh’s culture.

“Pittsburgh really was a hub for black cartooning in America through the Pittsburgh Courier,” said ToonSeum owner Joe Wos. “I think that is an important legacy, and this is the first time it’s really being recognized on this scale.”

Orrin C. Evans, one of the three people chosen to display his works and achievements, was one of the first African Americans to break the color barrier in mainstream media. Evans did this in 1947 by publishing the first black comic, All Negro Comics, according to his biography in the exhibit.

“He [Evans] came to believe that he was black-balled from the major industries of comics,” said Chay Tyler, program coordinator of Pittsburgh’s Citiparks. “So he wouldn’t get into the industry and soak up some of the talent they had on their staff.”

“Soaking up talent” was one of the last things on Evans’ mind when he began All Negro Comics. According to the exhibit’s brief biography of Evans, he believed that black people could not identify with any comic heroes that were of the same race.

As Evans was quoted in the exhibit, “We identified with Superman and Batman without giving much thought to it. Back then, there were no blacks in ads.”

Continuing onto the same wall of the exhibit is work done by the first female black cartoonist, Jackie Ormes. 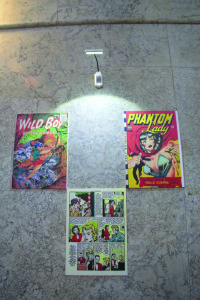 Ormes, a Monongahela Valley native, had no prior artistic experience before she asked the Pittsburgh Courier, one of the most successful black newspapers in the United States during their tenure, if she could draw comics for them.

“They [Courier] had maybe nine of 10 people on staff that just did comic art,” Tyler said. “Jackie was mentored by some of those comic artists.”

During Ormes’ time at the Courier, she drew images that depicted independent women, looking for their own road to success. One of her earlier and more successful cartoons that can be seen at the exhibit was Torchy Brown in Dixie to Harlem, which was a humorous yet motivating account of a woman from Mississippi moving to New York with aspirations of fame and fortune.

The last featured artist in this month’s exhibit is Clarence Matthew Baker Jr.

Though Baker, who had moved to Pittsburgh from North Carolina to escape from Jim Crowe laws, was not the first African American to draw or publish comics, he still had a famous style to his art.

“Romance comics, a lot of it, or jungle girl,” Wos said. “And he was forced sometimes to do things that are ethnic stereotypes, but that was the only way to keep his job.”

Early on in Baker’s career, he was limited to drawing white people, as evident in most of his drawings in the exhibit. Eventually, he evolved into drawing Marines for war support that tended to be morale boosting for readers.

“The exhibit is just another great example of how African Americans have really contributed to Pittsburgh, and to Pittsburgh’s history and continue to do so,” said Michael Cahall, director of history graduate studies.

“In some ways, we think of cartooning as lightweight, but I hope that this will open up bigger questions about the black experience and black history here, and what it means not only to the black community, but also what it has meant for the larger community of Pittsburgh as well. Any way that we can do that, then it is a good thing,” Cahall said.