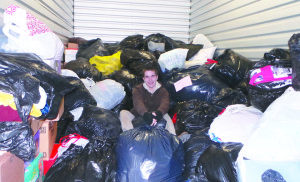 By: Katie Auwaerter | The Duquesne Duke

What were you doing when you were 12-years old? Playing video games? Navigating the awkward world of adolescence?

Jon saw something that many Pittsburgh residents see and usually try to ignore: the homeless. But instead of ignoring, Jon wanted to help.

“I wondered how possibly I could help those people, how I could make them feel like that someone’s out there that cares for them and cares for their well being,” Jon said.

And what started four years ago as a desire to help others has grown into Keep Yinz Warm, an organization dedicated to giving blankets to the homeless.

Now at age 16, this Mars Area High School student keeps himself busy, collecting blankets at over 20 locations and handing them out to those in need twice a week. The drop off locations span from Mars to Washington, Pa. with the Guardian Storage Facility on 2839 Liberty Ave. being the closest to Duquesne.

Christina Alvino, marketing manager for Guardian Storage, heard an interview of Jon on the news roughly a month before she received a request to rent a storage facility to Keep Yinz Warm.

“As soon I heard who it was for and I knew his story and the background, we automatically decided that we wanted to donate the space for them…we have a corporate culture of really trying to give back to the communities we’re in,” Alvino said.

“Knowing what he’s done not only for where he’s located but the entire city, we just really wanted to support him and support the city. We knew we would be able to provide him something to really help out from all angles.”

The recent influx of support community members and businesses was unexpected but appreciated, according to Jon’s mom, Kelly, who has supported her son’s endeavors since the beginning.

“It’s amazing to see the generosity of people, other corporations and other businesses stepping up to the plate and not just donating blankets for the homeless, but doing monetary donations and the storage facility…it’s amazing how my son has turned this into a phenomena!”

Through all of the recognition that Jon and his organization have been receiving, Keep Yinz Warm has been able to grow and expand beyond blankets. They are now collecting hats, coats, hand warmers, bags and even cookies.

But Jon’s not stopping there. He would like to see Keep Yinz Warm expand beyond its winter focus to help those during the summer as well. In the long-term, Jon hopes to develop Keep Yinz Warm into a national organization, bringing aid – and a little Pittsburgh vernacular – to those in need across the country.

“And he thought the type of shelter that is not just your run-of-the-mill shelter where it’s just bed after bed, but like a hotel where they have their own rooms with their own keys, with their own shower and that’s where he sees himself going,” she said.

So with Duquesne’s emphasis on service, what can we do to help?

“Even if [students] donated like one blanket or one hat, anything his a big help because eventually it’s going out to someone who needs it. Donations would help, just a shout out through other organizations….anything is a big help,” Jon said.