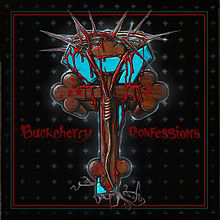 By: Mike Richards|For The Duquesne Duke

The Californian band  is most known for their 2007 single “Sorry,” from their album 27, which frequented many popular radio stations. Their musical style, comparable to the southern rock versions of Def Leppard and Guns ‘N’ Roses, is shown through all of their albums: Buckcherry, Time Bomb, 27, Black Butterfly, All Night Long and now Confessions. The band is quickly recognized by Josh Todd’s harsh vocals and the mixture of fast, heavy rock songs with heartfelt acoustic songs.

Confessions is an unique album in that it covers the Seven Deadly Sins and the reasoning behind why people choose to fall for them, along with the feelings of being together with the person you love. The theme of the deadly sins is apparent on the album cover, which depicts a rope hung around a cross with a crown of thorns on the top.

The thirteen-track album starts with their first single, “Gluttony”, which is a fast-paced and short song about worldly desires. The song is very catchy and uses four repetitions of “I want it/I need it and I love it” during the chorus. The song’s solo is the icing on the cake, which definitely puts listeners into the feeling of this new album.

“Wrath,” next on the album, is a little softer than “Gluttony” and talks about the need to fight while still keeping love inside. “Nothing but Tears” starts with an upbeat, almost acoustic lick during the verses but quickly shifts to a heavier chorus. The lyrics reveal that the singer is trying to get over a lost love and is left with nothing but his own tears. “The Truth” creates a break from the heavy rock songs in the album. It is comparable to “Sorry” and deals with the realization of having to leave the person you once loved in order not to hurt them.

The fifth song on the album, “Greed,” starts like “Nothing but Tears” and quickly switches to their signature chorus sound. This song explains why people take what they want and try to explain why we all have the inborn need to steal what we feel should be our own. The next track, “Water”, covers the way you experience the one you love, something like the feeling of water. In contrast, “Seven Ways to Die” is heavier than the last few songs and starts with Todd saying the song title with each “slam” of the drum and the guitar chords together. The song deals with the seven deadly sins, which will all lead you to a separate kind of death.

The eighth cut, “Air”, starts with some alien sounding effects and fading-in guitar sounds. The guitar quickly picks up and listeners are brought back into Buckcherry’s rock style. This song is comparable to “Water,” which also describes a lady that you enjoy spending time with. The next song, “Sloth,” starts with piano and Todd’s vocals, setting the mood for a slower-paced song. This song talks about how the effect of suicide can leave friends and family feeling empty inside. “Pride” covers the feelings of hating to learn about the things we do wrong and why we choose to ignore them.

The eleventh song, “Envy,” covers the feelings of jealousy we feel towards those who try to take the ones we have true feelings for. The lyrics reveal frustration towards the “thief” because he or she will never care as much as you will. “Lust” is very up-tempo and covers the fake feelings of love we become addicted to and the torture we are put through once the pleasures are over. The last song, “Dreamin’ Of You,” is a country-like acoustic song, which covers the feelings of separation between two lovers- whether it is distance or death.

The album is the perfect listen-to for the rock connoisseur or anyone who enjoys upbeat guitar riffs. The powerful lyrics and deeper meanings found throughout each track really put this new album as a contender for their best yet.