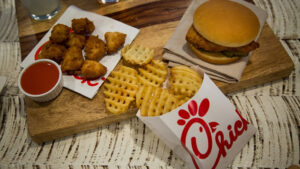 Chick-fil-A holds the reigning title of a superior “fast food” chain all around America. Not many people consider anything less than the reliable taste of their 8-count nugget meal and salty waffle fries when stopping at their local Chick-fil-A. However, the company has been known for supporting and funding several Christian charities in the past. This may not seem controversial at first, but these charities carry an ongoing history of opposing homosexuality, which brought an extremely contentious and negative light to the Chick-fil-A company.

After donating to more than 300 of these charitable yet homophobic organizations, Chick-fil-A has received tons of backlash. LGBTQ+ activist, as well as political and celebrity figures, participated in protests and boycotts in that past few years in which they spoke out about these inhumane ties with the restaurant chain. In 2012, Chick-fil-A made a statement stating, “Going forward, our intent is to leave the policy debate over same-sex marriage to the government and political arena.”

In contrast with its 2012 statement, Chick-fil-A has recently announced that it would no longer donate to the Salvation Army, the Fellowship of Christian Athletes and several other groups that have been criticized for their stances on LGBTQ+ issues. The company made it evident that its new motive for donation is to only give to charities involved in “education, homelessness and hunger,” with $9 million assigned to each new motive.

“When there is a tension, we want to make sure we’re being clear. We think this is going to be helpful,” said Tim Tassopoulos, Chick-fil-A president and chief operating officer. “Its just the right thing to do; to be clear, caring and supportive, and to do it in the community.”

Although these statements validate Chick-fil-A’s attempt to “mend the community” by avoiding homophobic relationships to itscompany, how are its consumers certain that this move was not made to simply boost popularity and sales? This idea streams from not only the past boycotts and protests, but also from the aspect of expansion of the company. In the U.K., for example, the country’s first Chick-fil-A announced eight days into its lease that the venue would not be welcomed to extend due to the company’s perceived LGBTQ+ opinions.

The first Chick-fil-A in Boston, Massachusetts, is also months away from opening its first location. Mayor Thomas Menino of the city announced his proposition to ban the company from opening after hearing Dan Cathy, Chick-fil-A CEO, voice his opposition of gay marriage in 2012.

This change in controversial opinion may have simply been a wake-up-call for Chick-fil-A in its stance on the company’s economic growth. However, Chick-fil-A has spent too many years ignoring the protests and disagreements with its homophobic views, and it is necessary that it finally makes an adjustment in its image. In the long run, however, it has not actually negatively impacted sales, as Chick-fil-A was named America’s favorite restaurant in June of 2019 based on customer satisfaction.

Chick-fil-A has finally realized that its inconsiderate beliefs may potentially impact the image of the company as a whole. Leaders of the company stated that the underlying mission of the chain is to “serve all members of its many communities.” They also recognize that they may have made mistakes in the past, and that changes are needed and will continue to be made in order to satisfy their customers.