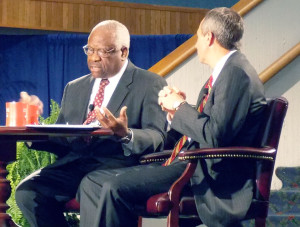 Following a brief welcome from Gormley, President Charles J. Dougherty and U.S. District Judge Joy Flowers Conti, Gormley showed a 16-minute video that he narrated and directed, which documented Thomas’ journey to the Supreme Court through racism, poverty and injustice.

From battling racial gaps to earning an undergraduate education at Holy Cross College and Yale Law School, the video displayed the justice’s journey, which ended with him sitting in President George H. W. Bush’s summer home being offered a seat on the United States Supreme Court.

During Tuesday’s discussion, Thomas, Gormley and Hardiman answered questions about Thomas’ high ideals, scholarship, legal acumen and perseverance in the face of adversity that helped him earn a place on the bench in the Supreme Court.

Thomas said he found his true calling at Yale, where he immersed himself in legal studies.

After earning his degree, he worked as an assistant under the attorney general in Missouri before he moved to Washington D.C. to work under the Reagan administration as the assistant secretary for civil rights and the chairman of the Equal Employment Opportunity Commission. President Bush appointed him to the U.S. Court of Appeals for the District of Columbia Circuit in March of 1990.

Bush approached him about 19 months later, nominating him as the associate justice to replace Thurgood Marshall’s seat.

“I believe when the president calls you to do a particular job, you are to do it,” Thomas said. “If I had to choose what I wanted to do, I wouldn’t be doing this … You don’t have that choice to wimp out.”

Conti, a district judge for the United States District Court for the Western District of Pennsylvania and Duquesne alumna, said in her welcome speech that Thomas’ formative years were shaped by his Catholic education and attributed his success to his work ethic.

“Having had the opportunity to read his memoir, I am truly impressed with his ability to persevere in spite of poverty … and politics,” Conti said. “He achieved success despite discrimination. I am pleased and grateful that he is here today at my alma mater.”

Gormley later alluded to Thomas’ published memoir titled My Grandfather’s Son, in which the judge tabulated his story because he thought he owed it to his grandparents who raised him “to leave a record of his life.“

As Thomas walked Gormley and Hardiman through his transformation from an young man angry at the world in the midst of civil rights protests, he maintained a light mood among the audience of over 500 people, cracking jokes and poking fun at the way a slight break of silence caused such a firestorm within the media.

Known for his quiet listening and silence among the nine justices that hold a seat in the Supreme Court, Thomas spent a majority of his free time educating himself in the library.

From humble beginnings, he said that the elementary Catholic education he received from a staff of nuns taught him at an early age the meaning of equality.

He said he specifically remembers Sister Mary De la Rosa, who “made us stand and repeat in unison ‘Why did God make you?’”

When approached with the topic of same-sex marriage, an issue currently being debated under his jurisdiction, Thomas declined to comment.

“I’d be back in the national news,” Thomas said.

At the end of the forum, Thomas offered his own advice to law students in the audience, just before he received a standing ovation at the conclusion of his talk.

“There are going to be challenges out there,” Thomas said. “I’ve certainly had my share, and I can’t say I’ve reacted appropriately in every situation. I just encourage them that no matter what, try to remain positive.”

Photo caption: Supreme Court Justice Clarence Thomas sits beside Thomas M. Hardiman, a judge on Third Circuit U.S. Court of Appeals, during his appearance in the Union Ballroom on Tuesday.

September 17, 2015 The Duquesne Duke News Comments Off on Bike week pedals onto campus

By Kayla Casavant | The Duquesne Duke Duquesne faculty and students came together this week for the first Duquesne Bike Week, which offered opportunities for new and experienced cyclists to learn more about pedal-powered transportation. […]

By Hallie Lauer | Layout Editor For over one hundred years, we have been naming our generations. Starting with the lost generation, a term coined in 1914, and continuing all the way to 2017 with […]