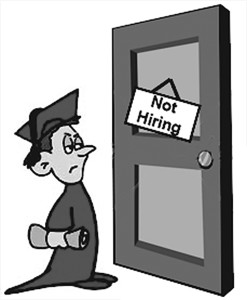 After pursuing suitable employers at the career fair last Wednesday, I couldn’t help but visualize myself in a rat race beside other frantic students searching for any lead to a possible job. But that is the reality of our age; students are competing against a stiff job market for any lowly job thrown their way.

Recent polling released from Demos (a public policy firm) and the New York Daily News suggest a bleak future upon graduation, with 40-45 percent of college graduates as either unemployed or underemployed. Many graduates are finding themselves in jobs not in their field or not requiring a degree. Those lucky enough to find jobs are often disappointed with the salary they make which is around $27,000, according to a Rutgers University study from May 2012.

At the same time, this troubling trend is coupled with soaring student loans that graduates are struggling to pay back on time. In the same Rutgers study, a national sample of 444 graduates from 2006 through 2011, the median debt held was $20,000. Crippled with falling wages, unemployment and high debt, students are moving back home with mom and dad earning the title of the boomerang generation. As one can imagine, this sorry state of affairs has had drastic effects on the graduate’s life. Major life events such as marrying, starting families or buying homes are postponed. Some even try to postpone their debt by continuing their education into graduate school in hopes of being more marketable in the career field, a gamble many are wagging.

The one silver lining in all this is that having a bachelor’s degree is more likely to land you a job than a high school diploma which has double the unemployment rate.

Employment upon graduation is not as automatic as it once was. So one must consider all the variables such as rising tuition, crushing debt and the bleak prospects of employment that are likely after graduation. Inevitably, students must ask themselves if the price they pay is worth the monetary toil they sought after education has placed firmly and heavily on our shoulders. After all, if the education we receive does not lead to the American dream job, maybe there is something wrong, more so than abysmal graduate unemployment numbers would suggest.

Today many of us feel the need to attend a prestigious university. In high school we were taught that we must attend college in order to become productive parts of society. Trade schools are often discouraged or carry some sort of negative stigma. These schools provide valuable education and more importantly do not carry that outrageous price tag that colleges do. Unlike some college degrees, trade schools actually provide you with job ready skills, and not just degrees for nonexistent jobs. Even with the job market tight, there are still many technical jobs that have a great potential for growth.

Additionally, there are other options to pursue such as a career in the military or starting out in an organization such as the Peace Corps. The time you amass in the military, you will gain a plethora of skills and leadership that you can carry over into private industry. But not all feel the calling to enlist, so for them the most viable option is still higher education.

This burdensome obligation to attend college has left many unhappy souls in its wake with their potential career path unfulfilled and sullied. I was like many others that came into college with no foresight of what I desired for myself and fortunately chanced upon an agreeable major. But I must confess that a major influencing factor for me was what area of study increased my chances of future job and career goals.

The uncertainty that comes with a college degree has left me considering for the first time about a position I have never found myself in. When you consider that throughout life the next step has always been laid out. Now with the next step of achieving employment at a decent company uncertain, it begs the question what will be next?

Many in our generations fear that the lofty oratory of some of our leaders has not been matched with reality and our success will not match the degree that our parents enjoyed. Returning home upon graduation in order to make loan payments and look for a job gives credence to this fear. However, this is not entirely set in stone, the future is still unwritten and the next innovation may lead to the next economic boom. The best thing we can do is to remain optimistic in the face of adversity and if we do secure that job, it makes it that much sweeter to have.

Ollie Gratzinger | Opinions Editor 04/19/2018 The Starbucks in the Union is the epitome of a community hub; students stop in to meet with friends, grab a drink, do some studying or just hang out. […]

11/30/2017 By Sean Armstrong | Staff Writer When many people hear the phrase fashion designer, they think of someone in high society who has his or her line of clothing unveiled at fashion shows in […]

November 1, 2018 The Duquesne Duke Sports, XC/T&F Comments Off on Duquesne XC teams compete at A-10 meets