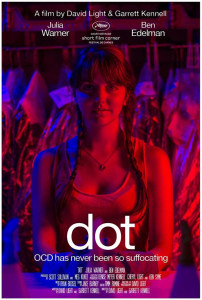 Through recent years, Pittsburgh has become a serious hub for film production.

People have witnessed the production of blockbusters like The Dark Knight Rises and Jack Reacher, marveling at the display of heroic prominence combined with the scenery of the Steel City.

But who would have imagined that Pittsburgh could also be home to a 30-minute dark comedy about a 16-year-old with an extreme case of Obsessive Compulsive Disorder who suffocates people because they are messy?

The film, titled Dot, is an independent production co-directed by Point Park University’s own Garrett Kennell and David Light, and produced by Duquesne alum Scott Sullivan (2012, history and English major).

Due to positive local feedback and overall support for Dot, the movie has received an invitation to be played at the 67th Cannes International Film Festival in France, one of the most prestigious film festivals in the world.

The film will be represented and has been endorsed by The American Pavilion, which is the center of activity for the American film community at the festival.

The festival, an invite-only event similar to America’s Sundance Film Festival, is covered by numerous media outlets in Europe and has seen star attendees from the likes of Steven Spielberg, Leonardo DiCaprio, Justin Timberlake and many more. For any film to be seen on such a stage gives directors and actors alike exponential amounts of recognition.

According to Sullivan, the concept for the film came in 2013 during a dream.

“David was having this daydream,” Sullivan said. “And he was thinking about this fat, naked guy in the shower…and he said ‘Well what if that guy was a serial killer, but was actually an innocent little girl?’ If that doesn’t make you go ‘What?!’ then I don’t know what does.”

With the basis of having a little girl play the role of a serial killer, Kennell and Light recruited the talents of fellow Point Park graduate, Julia Warner to play the protagonist known as Dot. Though Warner has previous experience in acting, playing a serial killer was an entirely new experience for her.

“Playing that kind of character was crazy,” Warner said. “It was really bizarre…no matter what she [Dot] wanted in her heart, which was to not kill people, she wasn’t able to do that. Getting into that kind of psyche was interesting.”

The plot of the film is focused primarily on Dot, who works as a dry cleaner. Her obsession of staying clean is so intense that she forces herself to kill anyone who stands between her and a mess. That is, until a love interest comes into the picture.

Though the current version of the film is 30 minutes, the initial project was meant to be much shorter, approximately two to three minutes long according to Sullivan.

“Garrett and David did a short little teaser trailer in July of last year,” Sullivan said. “Eventually, they decided that they wanted to do a little more—maybe something that was 15 minutes, which soon turned into 30.”

Sullivan’s inclusion as producer opened the floodgates in terms of opportunities for additional content, according to Light.

“There’s always a lot of rewriting during production, which creates obstacles for us, but Scott was great for doing that. And especially for finding locations, in that way Scott is like a miracle worker and made filming that much easier,” Light said.

Another reason the jump in longevity was due in part to receiving a grant in Nov. 2013 from the Sprout’s Innovative Community Film and Video Fund, where Dot was given $1000 to continue filming. Soon after, the film was invited to be a part of Cannes.

Sullivan remembers exactly where he was when he heard the news from Kennell.

“I remember I was at a coffee shop in Point Breeze,” Sullivan said. “I got a message on my laptop from Garrett saying ‘Dot is going to Cannes,’ and I just stopped. And a couple of tears came out.”

Although Cannes does not begin until May 14, Dot participated in Carnegie Mellon University’s Film Club’s Shot for Shot Festival on April 12, where it won the award for favorite film as voted on by the audience.