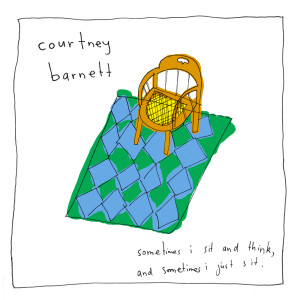 Obscurity and 90 percent of indie rock bands walk together hand-in-hand, mainly due to repetition of sound and bland songwriting.
However, every now and again, someone emerges from the depths of recreating someone else’s sound to produce an album that breaks the glass ceiling of meager notoriety. Insert Courtney Barnett. The singer-songwriter from Melbourne, Australia hasn’t been recording music as a solo artist for that long, but following her critically acclaimed double EP A Sea of Split Peas last year, a growing fanbase has been anticipating a full length debut ever since. On Tuesday, Barnett delivered with Sometimes I Sit and Think, and Sometimes I just Sit on her label Milk! Records, and offers some of the most vivid songwriting of the year.

Realistically, Sometimes I Sit and Think, and Sometimes I just Sit are direct citations from Barnett’s diary that dates back approximately a year ago. Throughout the 11-track album, Barnett has a tendency to retell intimate stories of relocation and religion with lighter and comical tones, involving purchasing her own percolator to save money.

These narrations, albeit occasionally rambling, undertake a very different approach to songwriting. As a listener, you feel like you are taking in every detail as if the song were a live event. In single “Depreston,” Barnett recants the day where she and her significant other travel to suburb, Preston, to view a house for sale. In chronological fashion, Barnett highlights memories of a man being arrested by a nearby house and old pictures of another man in Vietnam. By doing this, the objects symbolically represent a depressing and boring state of mind, instead of Barnett having to directly come and say, “This place seems a little depressing.” It makes for a much more visual experience that the listener can imagine for themselves.

Sonically, Barnett tends to stick to her grunge and garage rock roots. The majority of the riffs are quite simple and chord progression becomes rather predictable in most instances. However, because of Barnett’s ability to write a very catchy hook, the instrumentation serves a great purpose of background music that doesn’t overwhelm the listener. It is nothing necessarily new to the rock genre, but tracks like “Pedestrian at Best” and “Elevator Operator” are still well structured and play best at loud volumes.

As for Barnett’s singing, her style is a little unorthodox. Let’s get one thing straight, you’re not getting something with the range of Hayley Williams, but Barnett can carry a tune. She breezes through Sometimes I Sit and Think, and Sometimes I just Sit within the same register, and falsettos are few and far between. You can catch her deadpan, Australian diction in nearly every verse she sings, and in most instances it is refreshing to hear someone that refuses to conform to proper english accents.

Overall, Barnett’s debut offers many recycled versions of catchy garage rock with revolutionary songwriting. Sometimes I Sit and Think, and Sometimes I just Sit is quirky, yet fun and will hold a strong spot in anyone’s summer playlist for quite some time. Nearly every song has a memorable hook and chorus, and despite its instrumentation being slightly desirable, the pros definitely outweigh the cons. Score – 8.5/10