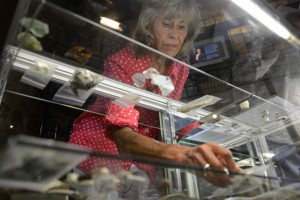 Pittsburgh’s rich source of history from industrial and wartime periods has recently welcomed dozens of artifacts thanks to an archaeological dig conducted in the city’s Point State Park.

The dig, which originated as a garden in honor of a founder of the Allegheny Chapter of the Daughters of the American Revolution, discovered a multitude of trinkets believed to be more than 150 years old, according to archaeologists on the scene.

Many of the artifacts, including a small ceramic jug, Pittsburgh-made glass bottles and even a Native American pendant, were found near the famous Fort Pitt Block House by archaeologist, Christine Davis.

Curator of the house, Emily Weaver, gave some additional information on the history of the house.

“While the land around the brick building is now a grassy state park, the site has been home to several military fortifications, at least one elegant home, smoky industrial plants, noisy railroad yards and crowded tenements,” Weaver said.

The Block House has been around since the mid 18th century and is the oldest building in the city.

With the age of the Block House, it is difficult to understand how many of these artifacts have survived beneath the ground.

Jason Schlude, assistant professor of classics at Duquense, has experience in dealing with archaeological digs in the Mediterranean region.

“Because the Block House is located near the river, layers of sediment could have accumulated underground and preserved these artifacts by the time period that they were used,” Schlude said.

Although the dig did not reveal anything that would change anyone’s perceptions about how civilians in Pittsburgh lived hundreds of years ago, Dr. Matthew Hyland, American studies professor at Duquesne, does not take the dig lightly.

“So much of the past is lost,” Hyland said. “While the dig wasn’t anything earth-shattering or ground breaking, we can always learn something from what we’ve found once these artifacts are catalogued and analyzed.”

This recent dig is certainly not the first time an archaeologist has found something buried beneath the steel city.

Back in 2007, Christine Davis was asked to survey ground for anything interesting before PNC Financial Services Group began building the 23-story tower, Three PNC Plaza.

What Davis found during her dig was fascinating. According to the artifacts she recovered, Three PNC Plaza was built on top of some Pittsburgh remnants near the end of the Civil War.

Artifacts such as tossing dishes, dolls and figurines were dated from 1840-1872. These objects were all buried beneath 26 feet of dirt and concrete, surprisingly still intact.

Davis was quoted saying that these findings were “so valuable” that “we typically don’t find things like this in archaeology” and that this “revealed how Pittsburghers lived, worked and shopped in the era before and after the Civil War, a period that established the city as a major industrial power.”

According to Davis, the objects found underneath Three PNC Plaza give Pittsburgh a different outlook.

“We think of the ‘smoky city.’ That is what Pittsburgh’s reputation was. What we learned from these artifacts is that there was another side to the story. It wasn’t just about iron and steel. There was a whole group of people operating their stores and living in boardinghouses and hotels and residences that had another story to tell.”

By Adam Lindner | Sports Editor July is finally here, and for sports fans, July signifies the beginning of free agency in both the NBA and the NHL. Despite a slow beginning to NBA free agency, […]

Betrayal April 24, 6:30 p.m. The band will perform at the Smiling Moose in South Side. Also performing is New Vegas, Bound by Faith and Beggars. Tickets are $10 in advance or $12 at the […]

Colleen Hammond | news editor 10/29/2020   On Tuesday, Oct. 20, a new, exclusive documentary on the life and papacy of Pope Francis was released in which his holiness publicly advocated for same-sex civil unions […]