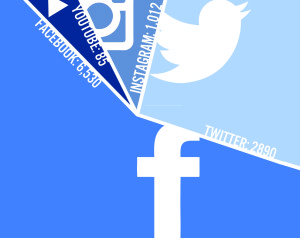 By Jill Power | The Duquesne Duke

All four of Duquesne’s social media outlets are monitored and updated by Duquesne’s Office of Public Affairs. David Jakielo, a former Duquesne student employed by public affairs, is responsible for updating and monitoring the school’s Facebook, Twitter, Instagram and Youtube pages.

The University decides which social media outlets to use by looking at “what we can reasonably sustain and what people are using,” Vice President of the Office of Public Affairs Bridget Fare said.

Each of the pages offers a different presentation of events on campus and Duquesne itself. The Facebook and Twitter accounts provide academic and athletic updates. They are also used to promote the achievements and endeavors of faculty and students.

Duquesne’s Instagram account is used in conjunction with events on campus. Students are being encouraged to send in photos they’ve taken to be featured on the page. Campus events, such as December’s Night of Lights, are the focus of the majority of the pictures.

Duquesne’s Youtube account, touting over 16,000 total views on 46 different videos, caters to prospective students, parents or those who want to know more about a specific area or school on campus. Some examples of popular segments are “Discover DU,” which highlights different events on and off campus, and “Campus Q&A,” a student reaction series.

More campus groups are utilizing social media to reach out to students, parents and the community. Duquesne’s 2013 Orientation team used social media to encourage incoming students to interact with each other and team leaders throughout the week.

“We used [Twitter] for reminders during the week as well as challenges, like ‘Go find a chair member who can play the saxophone,’ and we would reward them with Burgh-Bucks,” 2013 Orientation Team co-chair Jade Litzel said.

The app could only be downloaded from the University’s website and was created in conjunction with public affairs. Jakeilo helped develop the app.

“The demographics of the kids at orientation were people who had smart phones,” Jakeilo said.

The app featured a schedule of events and allowed students to sync their Instagram accounts in order to more rapidly share pictures both on Instagram and within the app.

“I think interactivity helps a million times over,” Litzel said. “Students feel comfortable using it, so any event that utilizes it kind of puts them at ease.”

Winter no longer a wonderland

November 7, 2013 The Duquesne Duke Opinions Comments Off on Winter no longer a wonderland

By Craig Taylor | Staff Writer Last Tuesday, popular video-sharing site YouTube announced a new initiative called “YouTube Heroes.” The program is designed to incentivize the average YouTube user to help out with some of […]

September 15, 2016 The Duquesne Duke Opinions Comments Off on Super stress: Millennials are feeling the burn

By: Duke Staff Many students know the feeling — it’s 2 a.m. on a Monday night, and your body is complaining as you fight desperately to finish your 10-page philosophy paper. You have two tests […]