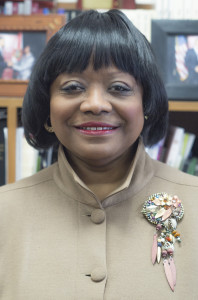 Duquesne board member and Urban League of Greater Pittsburgh president and chief executive officer Esther L. Bush was recently named one of the White House’s 10 Champions of Change in its Educational Excellence for African Americans program.

Bush, who has had a professional career spanning 40 years, was honored at a ceremony on Feb. 26 in Washington, D.C. for her efforts in improving the education of African-Americans in the community.

“It was really truly a fantastic opportunity. I felt so blessed and special,” Bush said. “I truly feel honored and special and motivated to continue and try to get others involved in being a participant in our children’s education.”

The Greater Pittsburgh chapter of the National Urban League, a national organization whose mission is to “enable African Americans to secure economic self-reliance, parity, power and civil rights,” is one of two affiliates in the country to score the highest grade in the NUL’s performance assessments for two consecutive years, Bush said.

After graduating from Morgan State University in 1973, Bush taught at Lake Clifton High School in Baltimore, MD until 1976, when she completed her master’s of guidance and counseling at Johns Hopkins University. Her involvement with the NUL also began in 1976, when she did consultant work with the New York chapter.

From then until 1994, Bush continued work with the NUL, serving as the borough director for both the Staten Island and Manhattan chapters and the president of the Urban League of Greater Hartford. Then, after moving to Pittsburgh in December, she became the president and CEO of the Pittsburgh chapter, a job she has held for 19 years.

In 1998, Bush founded the Urban League of Greater Pittsburgh Charter School, the first charter school to open in the city. The school, which is grades k-5 and math and science based, is one of the only all students to learn Spanish and how to operate a computer.

Duquesne President Charles J. Dougherty, who also serves on the executive committee of the Urban League board, said Bush is a “leader of the African-American community.”

“[Bush] pushes for change, but at the same time is thoughtful in the steps she takes,” Dougherty said. She listens to people in the community. She has a sense of vision for what Pittsburgh could be and particularly, how we could get past the kinds of racial opportunity gaps that have developed.”

Bush has been on Duquesne’s board for four years, an opportunity she “really appreciates.” In that time, she said she has been impressed with the “educational offerings and support” that the University provides for its students.

In the search for Champions of Change, members of the White House had reached out to the NUL for recommendations. Bush said she was pleased to find out that everyone had agreed to recommend her for the honor.

“It says we are living up to the mission,” Bush said, referring to her chapter. “It says that we’re providing the services that our constituency needs and they appreciate it.”

At the ceremony, individuals from the White House and Department of Education, including Secretary of Education Arne Duncan, divided the 10 Champions into two groups and interviewed them. Their answers to the questions, which regarded each individuals’ contributions to African American education, were streamed live across the country on the internet.

Moving forward, Bush said she hopes the recognition brings more attention to her belief that “education is the foundation for all of our futures,” and that educational opportunities allow people to have more choices.

“I hope that it provides continued and increased support for the Urban League of Greater Pittsburgh’s educational efforts because again, we are here to try to propose equity and excellence for all students,” Bush said.

Caption: Duquesne board member Esther L. Bush was named one of the White House’s Champions of Change.

By: Shivani Gosai | Student Columnist  Millions of Americans and their families struggle with everyday tasks due to dementia or Alzheimer’s disease. It has wistfully become the 6th leading cause of death in the United […]

By: Rebekah Devorak | Opinions Editor  Apparently in the United States, protests are only meaningful if they’re comprised of a throng of angry, unruly adults. On Feb. 7, Betsy DeVos was confirmed as the next […]

Salena Moran & Evan Penrod | Staff Writers 03/21/19 Weezer proves they will “do the things they wanna do” even if that means releasing their bland and forgettable 13th studio release, Black Album. Following the […]