In 2006, Dr. Scott Faber and Howard Kingston were told they were crazy for believing that autism was not a genetic disease, but rather an autoimmune one. However, this did not stop the pair from carrying out research for 14 years to prove those who doubted them wrong.

A biomarker is any substance that occurs naturally in the body that is measured to indicate a phenomenon. In this case, the phenomenon is a disease — autism.

With around $1.4 million in grant money funding their project, Faber and Kingston supported their hypothesis, even inventing their own measurement systems in order to complete their tests.

One of the biomarker measurements they invented involved tracking glutathione (GHS), an antioxidant found in the body that reduces oxidative stress. Improper levels of the oxidized variation of GSH can place children at risk of suffering from irreversible brain damage

Once the GSH oxidizes and becomes glutathione disulfide (GSSG), there is no more GSH left. If all of the GSH turns into GSSG, then the child’s immune system is no longer functioning properly. In fact, if there is anywhere from 3 to 5% of GSSG in the body instead of GSH, the immune system will begin to
weaken.

In terms of its relationship to autism, children under the age of two that show signs of having a weak or underdeveloped immune system are at a greater risk of developing autism.

“From 2006 to 2012, the world disagreed on this [biomarker] measurement by three orders of magnitude. We now make that measurement to plus or minus five percent,” said Kingston.

Kingston compared this discrepancy with the uncertainty of going into battle.

This is just one of the many markers that Faber and Kingston test for to see whether or not a child is trending towards developing autism.

All of these biomarkers, including GSH, are tested for through bloodwork. In their research, the team tested the blood of 30 children with autism and 30 children without autism.

Their blood samples were then given to John Kern, the head of Duquesne’s mathematics department. The purpose of this was to blindly analyze the data without there being any bias. This helped increase the credibility of their data.

With these findings, Faber and Kingston hope to apply these tests in a way that would be more accessible to people around the world.

“They don’t have to get to the disease. If we catch [it] soon enough, we can prevent [it]. We could rescue 2% of the world’s population. That is the dream of the doctor in myself,” said Kingston.

The goal is to be able to conduct the same blood work tests using a dry blood spot card. This allows children to be tested more frequently, along with allowing doctors to possibly prescribe the card to parents so they can test their children from home.

If a child were to have results that came back positive for autism, or possibly trending towards autism, then possible treatment or preventative measures could be used to intervene.

“An ounce of prevention is worth a pound of cure,” said Kingston.

While Faber and Kingston themselves have not come up with a cure for autism, their tests make it possible for children to receive the intervention they need from other medical professionals.

“It is because of our two different sets of talents that we were able to come together and form this team,” said Kingston

Faber is the Scholar in Residence here at Duquesne, which means that he assists in research, participates in committees and helps write grant applications.

Kingston is a professor of analytical chemistry, and has received many awards for his work in biology, chemistry and physics. Currently, he has a research team of 10, consisting of both graduate and undergraduate students. He and his team conduct research that uses isotope dilution in mass spectrometry and analytical chemistry.

At any given time, Kingston’s team can have up to 20 different research projects going on at once.

“This research group are the people I spend the most time every week with. I have no idea what a job is. I get to come here everyday and work with these wonderful people, and hope we can make a contribution,” Kingston said. 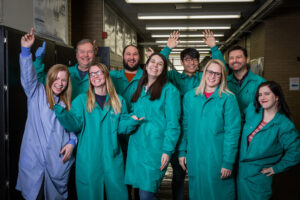