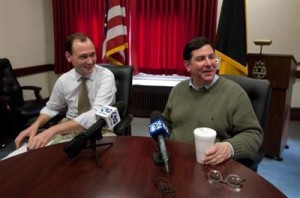 The mayoral election took place on Nov. 5. Not only was it a huge deal for the entire city, but members of The Duke got the chance to meet the candidates. Four staff members from The Duke share their experiences during this political season.

Tracking down Luke Ravenstahl was nearly impossible, as expected. The man rarely has a minute of time to spare for an interview, so any conversation has to go through his spokesperson, Marissa Doyle.

But along the way, there was a very interesting trend in conversation.

The sources I spoke to for the story were involved in different aspects of Pittsburgh culture, and I asked them similar questions. The most prominent question I wanted an answer to, though, was, “What did Ravenstahl do for the city of Pittsburgh, and what could he have done better?”

Man was it heated.

The answers fell in the range of two extreme opposites: Ravenstahl was horrible or Ravenstahl was excellent. There were very few sources who had anything moderately critical to say about the mayor.

And that’s what has been so interesting about the current administration.

There is no in-between. A majority of people will either remember him as the mayor who put Pittsburgh on the map or the mayor who brought corruption to city government. – JR

Wandering around for Wander

Where’s Wander began the Thursday before our election issue (published on Oct. 31), with an e-mail and tweet to the candidate. He replied back the next day with his cell phone number writing to contact him anytime.

And then the cross-continent phone tag began.

I reached him for the first time that Saturday and tried to set-up a block of time to interview him. With a job, a wife and six kids (all abroad), he could not guarantee any time for me. I would have to catch him when he was free.

Phone calls and e-mails, on my end, came in the next few days. On Tuesday I finally got a hold of him, well sort of. After a three-call interview, with an average of one question answered per phone call, I finally interviewed the International Man of Mystery. – ZB

I met Lester Ludwig before dusk on a Sunday night outside Rep. Mike Doyle’s office in South Side Works. I went for a ride in his Smart Car to Starbuck’s on 14th Street. Les took a legitimate interest in my inquiries, and explained over the course of two and a half hours why he thought he was legitimately qualified to run the city despite his lack of political experience.

Though he would quickly veer from the topic of the conversation (his own political agenda) and waste no words in criticizing Bill Peduto’s campaign tactics, Ludwig was sincere.

He prospered and failed and prospered again through his various business expenditures from the late 1960s until now, and envisioned a city he said could run without taxation.

Particular about the number of pumps of pumpkin spice the cashier dumped into his latte, Ludwig was a candidate who was highly passionate about ushering change into Pittsburgh’s government at its highest level. He simply lacked the political finesse and background to make his ideas a reality on Election Day. – PH

After weeks of attending debates and e-mail exchanges, Bill Peduto granted us an extended interview. We were finally able to go toe-to-toe with the next mayor of Pittsburgh.

It was a slightly nerve-racking experience. We were on a mission to discover if Pittsburgh was about to vote in another politician who would rule from a throne on Grant Street or a mayor who could lead our growing city towards a bright future.

We sat across from Peduto at the end of a long conference table in city hall, armed with packets of research. We looked like we were prepared for a deposition instead of a 30-minute interview.  Our election coverage seemed to be building up to this moment.

Before the interview began, Peduto, donning a particularly awesome sweater and blazer combo, chatted with Julian about evening plans to go see a shadow cast performance.

When the timer started he nonchalantly dove into great detail on his plans for Pittsburgh. He’s a career politician for sure, but Peduto is a Pittsburgher at heart. The man is as genuine as he appears in his ads. – AW

AP – Mayor-elect Bill Peduto and future chief of staff, Kevin Acklin meet with the media at a news conference Downtown on Nov. 6.

April 7, 2016 The Duquesne Duke Features Comments Off on Political Pendemonium

The Duke sent two reporters to the first major Pittsburgh presidential candidate rally of the season. These are their reactions to the mayhem. By Joseph Sykes | Sports Editor In 2012, I was 18 — […]