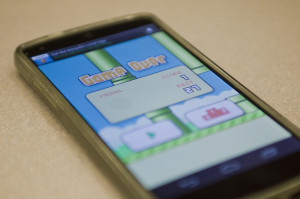 According to an article titled “Flappy Bird creator breaks silence, says he pulled the hit game because it was ‘addictive’” on The Verge, developer Dong Nguyen removed the application because it was designed to be played when relaxed. However, the difficulty of the game made for, simply, a non-relaxing setting.

With a story like that, you can’t help but to support Nguyen in deleting the application. When a game becomes dangerous, it stops becoming a game. Anything that is meant for fun should be fun, but if it becomes violent, it should be removed or banned. Nguyen made the right choice when it came to the game having potential to harm the psyche of others.

Currently, I am contemplating selling my phone to make upwards of $1,000 for a copy of Flappy Bird. People are willing to sell their iPhones online for colossal amounts of money. According to a New York Post article 60 people want to pay thousands of dollars on an iPhone with the program on it. Yes, it has gotten that bad that people are buying cell phones, tablets and iPods with the game already installed.  Luckily, selling these iPhone’s on eBay are not likely to go through. According to a CNET article, selling an iPhone with an app without the creators consent is a “no-go”. Even if you may not be able to make a $1,000 purchase , a cheaper option is available: a $30 copy of the software which is sent to your email so you can put it on your phone.

Are people truly that desperate that they are willing to shell out $30-$1,000 for what used to be a free game? Does no one else see the absurdity in these purchases? I’m sure by next week or next month, some new game will come and take over the app store and people will be over Flappy Bird.

Who even remembers playing Temple Run? (Well I do, there was one fateful day when I broke 10 million and almost cried tears of joy). And Draw Something? Those apps are now nowhere to be seen in the top 25 applications in the iTunes store, but were once number one themselves.

However, if you are one of those people who truly wants to experience Flappy Bird but don’t have the cash to shell out, there are other options. You can give in and play Flappy Doge online or await the release of Flappy Fall Out Boy, two items circulating around my Facebook feed. Just don’t get so addicted that you throw your laptop across the room in the Union. I’m pretty sure people will understand, but at the same time, is it really necessary?

Addison Smith is a junior print journalism and political science major and can be reached at smitha11@duq.edu.

Staff editorial – Violence in Pgh: How do we protect the vulnerable?

April 7, 2022 The Duquesne Duke Opinions Comments Off on Staff editorial – Violence in Pgh: How do we protect the vulnerable?

by the editorial staff April 7, 2022 Last week, multiple instances of violent abuse against children made headlines in Pittsburgh.  Dayvon Vickers, a 15-year-old kid from Homewood, was shot and killed on Wednesday, March 30. […]

By Shivani Gosai | Asst. Opinions Editor  Gun violence is huge problem in America; this is apparent. It might seem like mass shootings are America’s biggest gun-related issues, but those only make up a small […]

January 15, 2018 The Duquesne Duke News Comments Off on “No justice, no pizza.” Pressure increases on Pizza Milano after violent video.

Raymond Arke | News Editor UPDATE 08/22/18: According to multiple media reports, Mahmut Yilmaz was found not guilty of simple assault and aggravated assault on August 15. UPDATE 01/16/18: According to a Pizza Milano statement […]