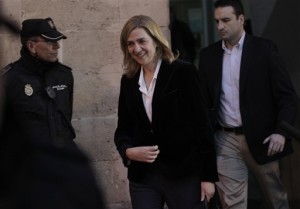 Growing up, most little girls want to be princesses. They want the sparkling pink dress, the dazzling high-heeled shoes and of course the title of supreme royalty.  About 15 years have passed since my days of prancing around my house in elaborate costumes, but as I watched the royal wedding in April 2011, the life of the royal stirred up childhood nostalgia and longing to be a part of the monarchy. Prince William and the Duchess of Cambridge, Kate Middleton’s wedding was broadcast worldwide. It seemed nothing short of flawless. Women everywhere envied Kate’s beauty and grace on her wedding day and the poise she displayed on the stage of royalty.

Fast forward to 2014 and another European royal has made a name for herself in the news, but not in the way that many would want to envy. Spanish Princess Cristina is the first member of the Spanish royal family to appear in court.

According to BBC News Europe’s “Why Spain’s Princess Cristina is In Court,” by Tom Burridge, “Princess Cristina, youngest daughter of King Juan Carlos, is being investigated in a long-running and highly publicized case that has damaged the king’s image and raised questions about the future of the royal family.”

The case involves a collaboration between Cristina and her husband Inaki Urdangarin, the owner of a company known as Aizoon, a real estate and consulting firm. The couple is accused of receiving money from a foundation and using it towards personal expenses.

The majority of these personal expenses were purchased on the company credit card, according to Doreen Carvajal and Silvia Taules’  New York Times’ article entitled “In Royal Drama, Spain sees it’s reality reflected.”

I believe that the premise of this case is a perfect example of the attitude that many people in positions of power have. Although they already have massive amounts of wealth, nothing is ever enough; they must go to extensive extremes to get more. Well in this case, those extensive extremes are tarnishing the name of the Spanish royal family in a detrimental way.

According to BBC News, Inaki Urdangarin’s name was removed not only from the Spanish royal website, but from all forms of Spanish royal literature such as informational brochures and pamphlets.

Anytime I partake in something that I could possibly regret I think, “What would the people who care about me the most think about that action?” Those people happen to be my parents, for whom I have the utmost respect. I would never want to do anything to disappoint my parents or lose their respect, one can only wonder where Cristina’s father, King Juan Carlos fits into this scandal.

Although unpublished by the royal family, BBC News states that King Juan Carlos’s public standing has fallen significantly. The scandal could not have come at a worse time as Spain is also experiencing an economic crisis according to CNN Economics. Because the economy is failing, the Spanish people are losing faith in their public policy as well as their Monarchy, which is why an economic scandal involving the monarchy could prove to be detrimental to the royal family.

Many Spanish citizens wonder if the king will abdicate, but this controversial topic has been kept quiet by the Spanish government, especially in the midst of this scandal.

Because the princess allegedly used the loitered money to pay for dinnerware, dance lessons and restaurant meals if she is found guilty she will be required to return 600,000 euros. Dance lessons and some expensive dinners sound nice, but I will stick to my Noodles and Company and Chipotle, for which my minimum wage job pays, if it keeps me out of court.

This scandal highlights the decline of royalty, especially in European countries where monarchies were seen as almost perfect delicacies. Cristina is definitely not the polished Kate Middleton envied by women across the globe. She is more an image of the decline of monarchal power and proof that it may be moving closer to extinction. Cristina recently testified in court on Saturday, Feb. 8.

AP – Spain’s Princess Cristina, center, leaves the courthouse in Palma Mallorca, Spain, Saturday, Feb. 8, 2014. Princess Cristina testified in court on Saturday during a historic judicial hearing to help determine whether she and her husband illegally used funds from a company to pay for expenses, including expensive parties at their modernist Barcelona mansion. (Manu Mielniezuk)

By Catherine Clements | Student Columnist Click. Color. Cut. Blur. All these actions can be performed in a matter of minutes on a single image. But does the fact that we can edit photographs mean […]

By Duke Staff Pittsburgh citizens are rightly upset that former police Chief Nate Harper stole $32,000 of public money and spent it lavishly on himself. He spent the embezzled cash on everything from fine dining […]

By: Rebekah Devorak | Opinions Editor  Now that the 2016 Rio Olympics are officially over, it’s safe to say that the United States dominated in two specific areas. The first area is the sports themselves. […]