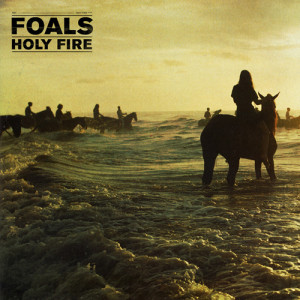 By Sam Fatula | For The Duquesne Duke

It would seem as though the art of good guitar play has escaped most rock bands’ grasp in the past couple of years, especially 2012. Luckily for the English-based quintet, Foals, their third studio album, Holy Fire, does not fall into this category, bringing along some early optimism in 2013 for the rock genre.

There are a lot of things to like about Holy Fire including some great guitar riffs, toe tapping drum fills and excellent vocal performances from the band’s front man Yannis Philippakis. These features are noticeable in just about any song on the album, but their pre-released single, “My Number” does these factors the most justice.

“My Number” is undoubtedly a pop-rock hit. The song begins with a soft guitar intro and progressively goes into a distorted overdrive accompanied by cymbal work from drummer Jack Bevan. Philippakis then enters the song belting an infectious chorus, “You don’t have my number, we don’t need each other now/We don’t need the city, the creed or the culture now…cause I feel, I feel alive.” Philippakis’ lyrics combined with an upbeat tempo give the song a rebellious feel. “My Number” has a Bloc Party-esque feel to it, with similar vocal styles and effects, which makes this song addicting to listen to.

The bulk of good material in Holy Fire remains in the first half of the album. Songs such as “Inhaler”, (the second single of the album) “Bad Habit”, and “Everytime” set a high standard for the rest of the album and it appeared difficult for Foals to deliver near the ending half of the album.

“Bad Habit,” from a lyrical standpoint, is the best track on the album. The bridge of the song gives Philippakis the opportunity to experiment with his vocal range and lyrical ability, as most of the band stops playing except for a bass drum in the background. You can almost sympathize with Philippakis as he croons, “I’ve made my mistakes/And I feel something’s changed/And I know what’s at stake … wash the stains away.”

The middle of the album comes as the biggest problem for Foals to maintain the listener’s attention. Tracks six through nine almost seem too structured to be classified as distinctive songs on the album. These four songs all have track times that run close to each other and the instrumentation eventually starts to bore.

The same guitar effects can be heard in “Late Night” and “Out of the Woods”, which are back-to-back tracks. The tempos are about the same and Philippakis doesn’t really change up his style enough here. It is almost like they made up a template for the middle of the album where the key changes are difficult to notice and take Holy Fire from what could have been a great album to slightly forgettable.

Foals does indeed change up the pace for the last two songs on Holy Fire. The 10th track “Stepson” sets a stage where Philippakis describes himself as being alone. In fact, there is a recurring theme of loneliness throughout the album. Philippakis seems content with this though, as long as he can share his life experiences with his closest friends.

The album closes out on the 11th track, “Moon,” a nearly five-minute song filled with beautiful harmonics and a light keyboard fill. Philippakis takes his range down an octave, something that gives his voice a very calming demeanor, a necessity to give Holy Fire a proper ending.

Holy Fire is a good indicator of rock albums to come this year, so people should be eager to see what else 2013 has in store for music. They will be touring later this year with Surfer Blood and Blondfire stopping in Pittsburgh at Mr. Small’s June 9, most likely promoting what is truly a good album.