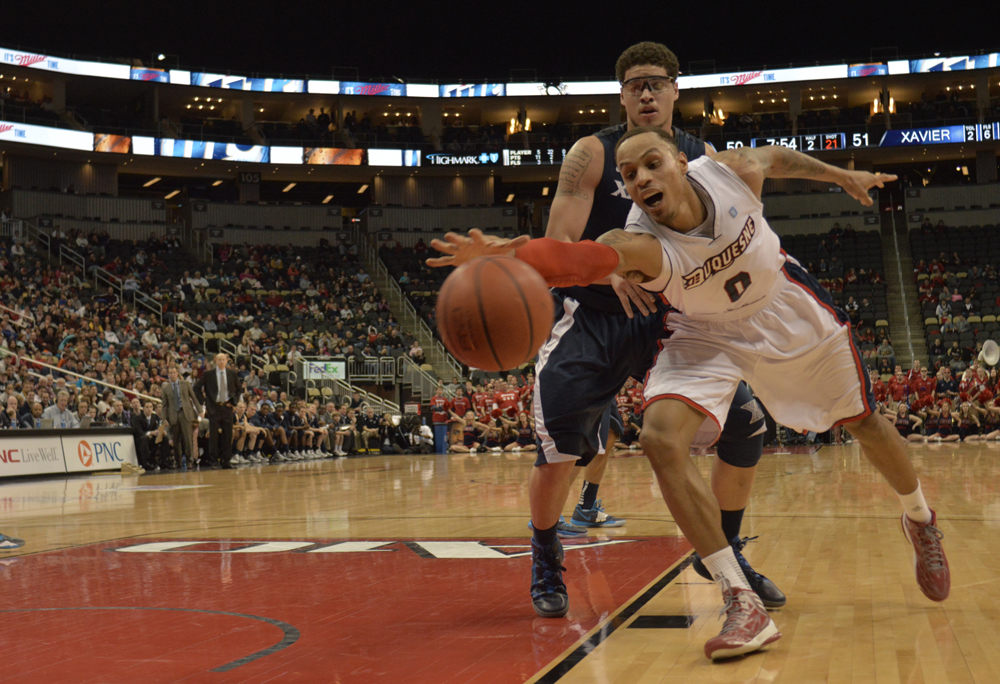 The effort improved, but the result remained the same.
The Duquesne men’s basketball team (7-16, 0-9) fought to stay within striking distance of Xavier (13-9, 6-3) to the waning minutes of Saturday night’s game at Consol Energy Center, but the Dukes were ultimately outmatched by the larger and more experienced Musketeers.
Duquesne fell 73-65, and are on an 11-game losing streak, the longest streak since the Dukes lost nine in a row twice during the 2005-06 season. The Dukes finished that season 3-24, 1-15.
Coach Jim Ferry acknowledged that the young team’s effort was more enthusiastic, but not enough to overtake the Musketeers
“I thought our guys really competed tonight. Significantly different than the GW game,” Ferry said. “It was nice to see a young group respond. It’s still tough; we played well enough but we had stretches where we couldn’t score.”
The Dukes jumped on Xavier early, holding a 14-7 lead less than seven minutes into the game. But the Musketeers clamped down on defense, forcing Duquesne to the perimeter and forcing it to settle for contested looks, leading to a 26-12 Xavier run to close the half.
Down seven at the break, Duquesne quickly responded with a 21-4 run where everything it put up seemed destined to go in. Holding a 47-37 lead with 12:54 remaining, it seemed like Saturday might have been the night the Dukes would pick up their first Atlantic-10 win of the season. That abruptly changed, as Xavier answered with yet another run.
The Musketeers took just over four minutes to regain the lead when Isaiah Philmore drove the lane, hit a layup with contact and made the ensuing free throw, putting Xavier up 51-50 with 8:10 remaining.
Xavier cruised to the victory on a 36-18 run to close the game.
Giving up rebounds is what doomed the Dukes, Ferry said.
“We had that segment where I think we were up 10 and the shots weren’t going down and they just really imposed their will on the offensive glass,” Ferry said. “I think we gave up like five offensive rebounds in a row that led to free throws or baskets and that was really a backbreaker.”
Xavier put three big men on the floor together down the stretch, making it nearly impossible for the Dukes to penetrate the paint. Duquesne instead continued its trend this season of forcing the issue on the offensive end, putting up a high percentage of its shots with more than 20 seconds left on the shot clock and taking over half of its shots from beyond the arc.
Freshman forward Quevyn Winters, who finished with a career-high 19 points, said he thought the only reason Duquesne lost was because its shots stopped falling. Junior guard Jerry Jones agreed and said the Dukes knew entering Saturday’s contest they would have to live on the perimeter.
“Coach coming in said they were big defensively, they were a big help and defend team so the thing was to just drive and kick out,” Jones said. “And we were hitting most of our shots. I guess we stuck with it, but we couldn’t hit them when we needed to.”
But one surprising bright spot for Duquesne came in the form of senior center Andre Marhold, who nearly earned a double-double, finishing with nine points and 10 rebounds while making all four of his shots. After seeing limited action in the last several games, Marhold saw the court for a healthy 32 minutes Saturday.
“I thought Andre Marhold really responded after having a tough couple of weeks,” Ferry said. “I thought maybe he learned from it and stepped up.”
While Marhold was implemented back into the lineup, fellow senior Sean Johnson only played 12 minutes while Duquesne started three freshmen together for the first time this season.
“I think the freshmen have been playing really well this year and really hard, really aggressively. I just thought it was time to give these guys an opportunity to start together,” Ferry said. “At the same time, I’m trying to take a little bit of pressure off Sean. I think people have been focusing on him as one of the guys as a returning scorer, really crowding his space.”
The Dukes next play Temple tonight and then will return home to play Rhode Island on Saturday at the A.J. Palumbo Center at 7 p.m.

Photo: Connor Hancovsky / For The Duquesne Duke |
Andre Marhold attempts keep the ball inbounds as the Dukes lose to Xavier, 73-65, Saturday evening at the Consol Energy Center. The Dukes have lost 11 straight games.

By Andrew Holman | Sports Editor Who’s in? Who’s out? The college football world has been waiting to find that out since the season kicked off on Aug. 26 and that time is rapidly approaching. […]

By Duke Staff The ugly side of America has been thrown in our faces for the last few months. Issues that some of us preferred to pretend were things of the past — racism, sexism, […]

By Ollie Gratzinger | Staff Columnist  For the past year or so, everyone in the country — and some beyond — had their eyes set ahead to Tuesday, Nov. 8: the day America would decide […]