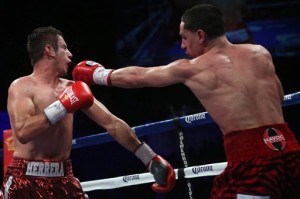 Young fighters have to prove they can beat savvy veterans on their way to the top. Some fighters shine in these fights, while other struggle, but get the necessary win. Garcia didn’t look great, but he got the rounds and experience. Williams showed he is a force to be reckoned with.

Garcia is known as a puncher, but he is also a really good boxer and he has a good all around game. Herrera is a technical veteran who knows all the tricks, but he has very little power. Garcia can get a little looping with his hooks, and while he makes up for it with good hand speed he will need to get them shorter. Herrera throws a lot of punches and most of them land. He gave Garcia some problems with his awkward style and constant pressure. Garcia more than anything else is a warrior. He can take punches and he always remains aggressive. He countered Herrera well and was able to land in between Herrera’s awkward lunging combinations. Garcia at times looked confused by Herrera and he was hesitant at times, which hurt him. This was a tough test for Garcia and a good fight for him as he rises in the championship ranks. Garcia is quick on his feet and he was able to move when Herrera closed in. At times Garcia lost his technique at some times and would go straight back allowing Herrera to follow up. Garcia was able to land harder punches during several of the big exchanges in the fights. Garcia always came right back at Herrera when he was hit and landed stronger punches. In round 11 a different Garcia emerged from the corner. He had stopped backing up and he began to bring the pressure to Herrera while Herrera’s back was to the ropes. Garcia’s nose was leaking blood while Herrera’s blood was coming form a cut underneath his left eye. The two fought all out and the fight was very close as a result. Herrera came in strong and made a statement about who he is as a fighter, but in the end Garcia had done enough to win the fight. Garcia came on strong in the second half of the fight landing 20 or more punches in rounds 7 through 11.

Wilder the bigger man has been brought along very slowly and has fought very few notable opponents. Scott had been a contender for a while, but few think he has what it takes to become the next heavyweight champion. Wilder waited for a moment of opportunity, while Scott was very hesitant to throw punches. But, halfway through round one Wilder connected with a left hook followed by a straight right hand and it dropped Scott. He threw jabs well to set up the combination. The left hook put him down, but the right, which was mostly blocked, was what hurt him to the point where he couldn’t get up. It was the first notable punch of the fight and it didn’t look bad, but it landed perfectly and Wilder’s incredible power showed. Scott made every attempt to get to his feet, but he was too hurt too. Wilder didn’t even break a sweat to beat the man who was supposed to be his toughest test to date. Wilder clearly has unparalleled power, however, the question remains whether he has the periphery skills to use it to beat the best of the best. That will come because with this performance he showed that he deserves to fight the best and he can no longer be ignored.

Adamek is known for his effective jab. Glazkov, however, was the one landing jabs. Glazkov started throwing the jab early and it hurt Adamek. Adamek’s right eye quickly swelled shut. Because of that jab, Adamek’s nose was also bleeding heavily. After Glazkov had established the jab he began to land more of his power punches, although Adamek did not allow him to land his biggest shots. Glazkov was landing huge shots, but Adamek was taking them and coming forward. Glazkov tired a bit late and was probably frustrated because the punches he landed on Adamek had dropped most of his other opponents. He was tough and battled through all that to continue to control the fight. Glazkov did alright at protecting himself, although, he probably could use an improvement in that area. Adamek gave Glazkov a tough test and batted through all the punches.

Chilemba the bigger more athletic fighter worked well off of his jab. Grachev did well to cut off the ring. Chilemba was throwing crisp accurate punches. Grachev was trying to set up his big punches, but he had trouble getting inside. Grachev was trying to get Chilemba against the ropes, but Chilemba did well to win some of those exchanges, which discouraged Grachev. Chilemba dominated every facet of the fight thanks to his aggressive jab. Grachev was able to land some hard shots late, but it wasn’t enough to overcome the comfortable cushion Chilemba had built.

Ten seconds into the fight Williams countered a jab with his right hand and it rocked Hernandez. Hernandez went down, but he got right back up. Williams did not abandon his strategy despite the quick knockdown. Hernandez was trying to pressure Williams, but Williams was composed and waited for his spots. Williams was professional and showed all of his skills. He is one of the top prospects in the country and he showed why he is so highly touted in this fight against a tough and smart veteran. After 30 seconds of round three Williams landed the perfect left hook as Hernandez was leaning into the punch. Hernandez attempted to get up, but he could not make the ten count.

Santos the hometown fighter has big power and looked to score the knockout. Santos came flying out of the gate and landed big punches early. Barron was calm and relaxed in the face of an offensive onslaught. Once Santos realized he was not going to get the quick knockout he fought smart and smothered the bigger fighter. Barron was the one who dragged the fight into a slow pace, but Santos lacked the experience to escape the clinches and at time got too close allow Barron to hold on. In round five with under a minute remaining Santos landed a right hook to the body followed by a right hook to the head it dropped Barron who fell hard and was clearly hurt. The corner then threw the towel into the ring indicating the fight should be stopped.

Nevin, an Olympian, came into his pro-debut poised and ready. He boxed intelligently and didn’t get caught trying to do too much. Candelaria was just an opponent who did a lot of things incorrectly. He got caught by many of Nevin’s punches. Nevin controlled the action by landing jabs and working the body. A few of Nevin’s punches were wide and long, which you would expect from a fighter making his pro-debut. Candelaria was tough and gave a good fight. He never gave up and made Nevin earn his victory.

Kavanagh was aggressive early controlling the action. Kavanagh was landing effective punches. Navarro was swinging wildly with looping shots that Kavanagh could read. Kavanagh would get hit when they got into exchanges, which probably wasn’t helping his strategy. Kavanagh was allowing Navarro to pin him against the ropes in order to instigate exchanges. Kavanagh got the better of the exchanges, but he was getting himself in dangerous situations far too often. He is a good fighter who should be able to land from range and keep his opponent off of him.