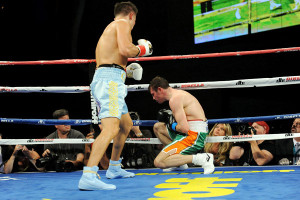 Sometimes people are just different. Gennady Golovkin is different. There is no comparison for him in the boxing world. He is the Barry Bonds, Michael Jordan or Barry Sanders of boxing. His power is unlike almost any other fighter. However, unlike every other power punchers you have ever seen he is also great with his defense, footwork, jab and hand speed. The advantage he has over every other fighter in his weight class, and the class above and below, is almost unfair. The question is will enough of the top fighters be brave enough to fight him? or will he be an urban myth because he never gets a chance to cement his legacy with big-name wins?

The main event on HBO “Boxing After Dark” from Mashantucket, Connecticut was a 12-round middleweight clash. Gennady Golovkin (26-0, 23 KOs) faced Matthew Macklin (29-4, 20 KOs). Golovkin’s power is something that only a few people in the world posses and it is what trainers everywhere dream about. With an amateur background that stands up against any elite fighter, you can be sure that Golovkin is not just a puncher. Macklin was cut above the left eye in round two from a punch. Early in the fight Golovkin went to the body and it clearly affected Macklin. With two minutes left in round three Golovkin landed a left hook to the body and Macklin stayed on the canvas for the whole ten count. Gennady Golovkin won by knockout at 1:22 of round three.

The second fight on HBO was a super middleweight brawl set for 12 rounds. Thomas Oosthuizen (21-0-2, 13 KOs) was up against Brandon Gonzales (17-0-2, 10 KOs). Gonzales did well early to keep to his game plan and not be bothered by the tall, awkward southpaw in front of him. Gonzales was aggressive early and was able to hit Oosthuizen because Gonzales has better hand and foot speed. Gonzales, who has never been 10 rounds, seemed to tire in round six as Oosthuizen out-landed him in that round. Oosthuizen gave him some good pressure down the stretch, but it may have been too late. The fight went to scorecards and the judges had it 98-92 Gonzales, 96-94 Oosthuizen and 95-95. Thomas Oosthuizen and Brandon Gonzales fought to a 10-round draw.

The first fight on HBO was a light middleweight fight set for 10 rounds. Willie Nelson (21-1-1, 12 KOs) took on Luciano Cuello (32-3, 15 KOs). Willie Nelson is a fast-rising prospect that fights on the inside even though his height and reach advantage suggest he should fight from the outside. In round three Nelson suffered a cut over his right eye from a head-butt. Cuello was able to land several strong punches because Nelson was not moving very much and he was not fighting from the right distance. Once Nelson started to land his jab he created the space he needed to dominate the fight. Coming into round ten there was desperation coming from both of the fighters’ trainers. Cuello responded and had Nelson hurt almost from the first punch of the round. For Nelson it was struggle just to clinch and hold on for the final three minutes. Nelson seemed to have tired before the final round because he had been so busy in the early rounds and also because he had taken some big punches. After 10 rounds the judges scored the fight 97-93, 97-93 and 96-94 all for Nelson. Willie Nelson narrowly escaped a dangerous opponent with a unanimous decision.

The main event on ESPN2 “Friday Night Fights” from Jacksonville, Florida was a 10-round middleweight fight. Sergio Mora (24-3-2, 7 KOs) faced Grzegorz Proksa (29-3, 21 KOs). Mora is probably best known for winning the first season of the reality TV show “The Contender,” while Proksa is best known for his recent loss to Golovkin. This was a slow fight as both fighters have awkward styles and neither has supreme power. Mora was impressive with his ability to land punches especially his jab. Mora gained confidence through the fight and while that confidence makes him vulnerable to counters, it is also when he is best able to attack his opponent. Mora had built a lead throughout the fight and yet he still came out strong in the final round. The fight went all 10 rounds. The judges scored the fight 96-94, 98-92 and 96-94 all for Mora. Sergio Mora won by unanimous decision.

The first fight on ESPN2 was a 10-round junior middleweight bout. Patrick Teixeira (20-0, 17 KOs) faced Marcus Willis (13-3-2, 3 KOs). Teixeira seemed to respect Willis, knowing he was his toughest test to date. By round two Teixeira had started to let some big punches fly. Willis withstood some big punches from Teixeira and was able to navigate any danger by clinching. At the end of round four Teixeira sustained a cut over his left eye. In round seven Teixeira landed his best shot of the fight, but Willis did not fall. Willis let Teixeira throw everything he had and when he had worn out Willis started to counter and did well to shift the momentum in the round. Teixeira was more active and he was controlling the pace. Willis is not a power puncher, so Teixeira was able to coast through the late rounds even though he was tired because of the early lead he had built. The fight went the distance and the judges scored the fight 98-92, 97-93 and 96-94 all for Teixeira. Patrick Teixeira won by unanimous decision.

This weekend was extremely top-heavy. There was only one knockout, but it was spectacular. The rest of the fights were relatively slow and all went the distance. But, getting to Golovkin is worth that price any weekend of the year.

AP Photo – Gennady Golovkin, left, lands a left hook to the body that finishes Matthew Macklin, right, in the third round Saturday.

May 6, 2013 The Duquesne Duke Sports Comments Off on Mayweather Still Unbeatable

By Saúl Berríos-Thomas     Floyd Mayweather Jr. is arrogant. He is annoying. He is entertaining. He is funny. But more than any of that he is an extremely hard worker. What Mayweather puts his […]