By: Adam Kelly|For The Duquesne Duke 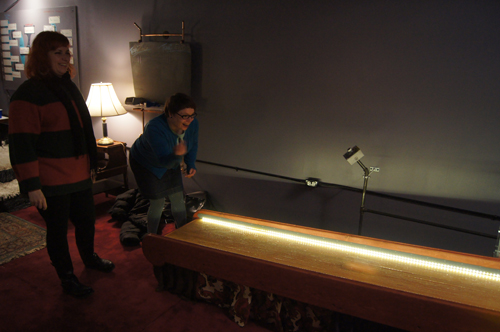 There is little innovation to be found at most arcades. Play Parlour is not your average arcade.

But Play Parlour, in Lawrenceville completely breaks this mold. While all of the popular arcade games can be found here (mini golf, skeeball, foosball and whack-a-mole), they have some unique qualities. All of these games are handmade by an artist and sculptor named Adam Shreckhise, who gives them each his own personal flavor.

If there were such a thing as “professionally-homemade,” Shreckhise’s pieces would fit the description.

“I made these because of a general dissatisfaction I have with most arcade games,” Shreckhise said. “There is just no creativity in the games anymore.”

Shreckhise feels that games at Kennywood and other places are very “bland” and lack creativity. It took him just a year or so to build all of these arcade games, and it’s safe to say that they are anything but bland.

“It’s hard to say when someone becomes an artist,” Shreckhise said. “In some ways, I guess I’ve been an artist ever since I was a little kid.”

Shreckhise says that he’s always wanted to build carnival games. Perhaps, the “kid” in him has inspired these games.

The Wreckless Arcade Tournament, held Saturday, was an interactive showcase of his creations. Around 30 people signed up for the tournament at the Play Parlour in Lawrenceville to play these games in a party-like atmosphere. Over the course of the day, between 120 and 150 people showed up to the event, according to Shreckhise.

The actual description on Play Parlour’s website is, “an atmosphere that sits somewhere between cocktail-lounge and coffee-house.” The atmosphere is due in large part to Sneaky Mike, who emceed the event until DJ Zombo who, according to Shreckhise, took over later that day. By including party tunes, such as his self-proclaimed personal favorite Sandstorm, Sneaky Mike was able to set the scene for a fun time. 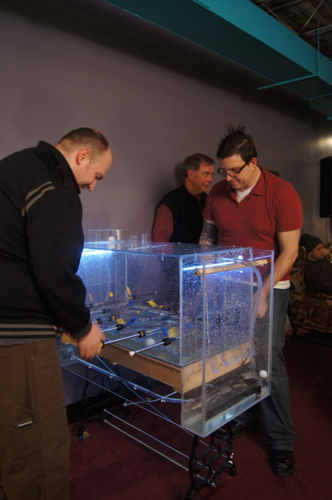 All of these creations are traditional arcade games with an interesting twist. The mini golf course is made from carpeting and computer motherboards; the foosball table is floating over water; and darts is played with a pair of light-up dartboards.

The mini golf course, called the Aqua-Quixotic Putting Range, even has a working windmill on it. There is a button right in front of the piece that operates the windmill, which adds both a scenic and more interactive dimension to the game. The working windmill element made it the crown jewel of the arcade, as it represents Shreckhise’s incredible attention to detail.

The foosball table that hangs over water is another game that catches the eye. It really gives the traditional game an interesting water polo-like twist. The objective is the same as a normal game of foosball, but the water element gives the game an interesting physics change. Obviously, the ball moves much slower when the surface is water.

The Dueling Dart Boards is another interesting game that may be overlooked due to all of the other crazy inventions. This is a traditional game of darts, except with two dart boards and a couple of Shreckhise’s unique touches, of course. When two opponents play each other, a switch may be flipped that illuminates the dartboard that is currently being used.

Not only is this a good idea, it also seems like a necessary one given the dark, yet ambient atmosphere of Play Parlour.

Amber Coppings, Shreckhise’s wife and fellow artist, gave background on Shreckhise, saying that he previously made robotic sculptures. She also said that many of his works involved taking talents and hobbies that are not his strengths and including them in the art. For example, if he weren’t good at playing guitar, he would create a robot playing the guitar.

Sandy Vansuch, another friend, helped Shreckhise’s him put this all together. She considers herself Shreckhise’s “stand-in mom.”

Vansuch said that Shreckhise hopes to have the arcade be permanent. However, due to the vast amount of games, a permanent arcade might require a location change.

Right now, the Wreckless Arcade Tournament is operating on a per-show basis. He hopes to make it at least once a month, for now.

“This is a kick-start campaign for Play Parlour,” Vansuch says, “We hope this draws attention.” 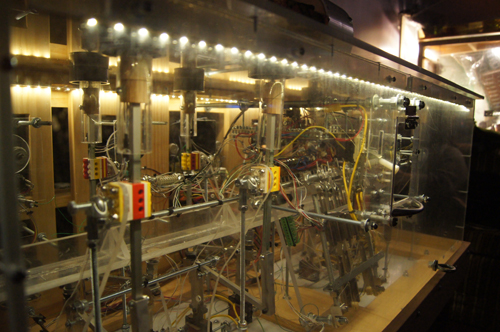 December 23, 2017 The Duquesne Duke Features Comments Off on Last minute gift ideas for the holiday procrastinator

Jamie Crow | Staff Writer 12/23/17 It’s that time of year again, where malls and stores are filled with last minute shoppers trying to find the perfect gift before the holidays arrive. If you’re one […]

Bridget Seelinger | The Duquesne Duke The School of Education at Duquesne University recently received accolades for its efforts to improve the education of middle school and urban students. Olga Welch, dean of the School […]

September 1, 2016 The Duquesne Duke Features Comments Off on Carie Cunningham on journalism and the move to academia

By Seth Culp-Ressler | Features Editor Professor Carie Cunningham joined Duquesne this year as the newest member of the Journalism and Multimedia Arts faculty. Cunningham brings a wealth of broadcast experience to the department and […]