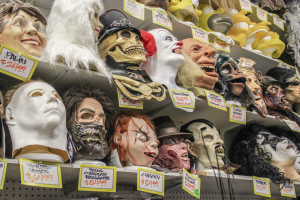 Halloween can be an ordeal when it comes to finding a costume.

Luckily for Duquesne students, finding the perfect costume, whether it’s extravagant, fun or just plain scary, is a walk or bus ride away.

The closest store in terms of distance from Duquesne is Spotlight Costumes, located in the South Side, at 1503 East Carson St. Spotlight Costumes sells and specializes in many types of costumes year round, and appear to be prepared for this year’s Halloween festivities.

“We order [Halloween costumes] as early as January,” said manager Ron Thompson. “We go to a trade show usually in Las Vegas or Houston and they show what’s coming out for that year.”

This year, Thompson is excited about selling a certain caped-crusader costume that dates back to the 1960’s.

“The newest thing is the Batman costume that Adam West wore in the original TV series that ran in 1966,” Thompson said. “The costume is being pushed very hard and heavy this year and is very well done, but it’s also expensive.”

If you’re not willing to dish out the money for the classic Batman costume, Spotlight offers retail costumes as low as $40, according to Thompson.

Costume World, located in the Strip District, is another option for a wide selection of costumes, with new pop culture-based costumes.

“We have Breaking Bad costumes this year, Man of Steel from the new Superman movie and also one from the new Spiderman movie,” said assistant manager of Costume World Elizabeth De Lyser.

Costume World sells costumes for $60 and rentable pieces for around $120, according to De Lyser.

But if you are interested in dressing up as Walter White, Superman or Spiderman, De Lyser strongly recommends that you start looking to buy immediately so that you can get what you want.

“You want to get here early before it’s too late in October because all of the selections will be gone. The earlier you come, the better the chance you have of finding something good.”

If you’re not interested in spending more than $50 for a costume, vintage thrift store Avalon Exchange in Squirrel Hill is currently selling an array of costumes for the Halloween season.

“We carry a variety of costumes,” said store manager Bri Proctor. “Probably 50% of our Halloween inventory is new, and the other half is actually used, so you have the variety to mix-and-match according to your budget.“

Being able to customize your costume based upon buying new and used inventory gives you the opportunity to be original, something that Proctor says sets Avalon apart from other Halloween retail.

Avalon carries costumes from the likes of cheeseburger, bacon suits and as well as ugly Halloween sweaters for those who “don’t want to dress up but want to be in the spirit.”

By Alison Caracciolo | Staff Columnist What’s scarier than zombies, ghosts and ghouls combined? How about being a broke college kid during Halloween? With the spooky holiday right around the corner, the average college student […]